Newsletter
Sign Up today for our FREE Newsletter and get the latest articles and news delivered right to your inbox.
Home » 1963 Chevy Impala Dream Car Becomes A Brandy Wine Reality 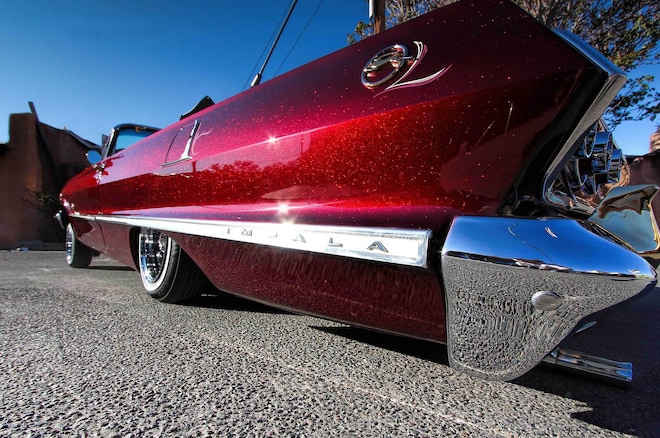 Abel Abeyta has been lowriding for quite a long time now and has owned his fair share of beautiful cars that he has cruised all over the place. One of his dream cars has always been a ’63 Impala and that’s just what it remained—a dream car. That is, until he finally got ahold of one and made his dream a reality.

Abel searched and eventually located his dream quest that turned out to be a clean hard top that didn’t take him long to build and hit the streets of downtown Albuquerque. Not too long after, his goal of one day owning a ’63 Impala was finally reached but it became clear that it was a drop top that he ultimately wanted. His good friend and Impala Car Club president, Ken Montoya acknowledged the change of heart and started another search for his friend that came across a good candidate to start out with.

Abel had to sell his hardtop to free up the funds so he could start all over again to build his real dream car. After pulling the frame off of the body, he had it completely wrapped to insure the car wouldn’t twist under hydraulic pressure. When it came time to start doing the metal work and paint on the body, he didn’t have to look too far because his good friend Ken also owned Top Auto Body.

After many hours and long nights at the shop the classic convertible was ready to get some color. Ken laid down a magenta flake base color and covered it up with a whole lotta House of Kolor Brandy Wedine. The car waited patiently until it was wet sand and pin-stripped before being clear coated once again. After the paint was dry and cured the drop top’s entire body was buffed out, polished and ready for assembly. An all new white leather interior was installed and later on down the line came the “Old School” Reds hydraulic system that was showcased inside the trunk of the car.

Finally Abel can rest easy and look at this car and say his childhood dream did come true. Though it was a 1963 Impala, he had to find out first if his vision was a hard top before truly realizing it was this convertible that would make his quest come true

A bond between brothers is unbreakable and Alex Ornelas and his older brother, Richard, AKA “Mick,” had nothing short of an incredible relationship when they were growing up

Ask Jaime Gonzalez about his 17 year Impala build and he’ll tell you, “This is a labor of love! The journey was challenging but it’s one that I would never change or forget!”

It took Pinky only 10 months to complete this flawless ride and when you consider his track record, it’s safe to say that this won’t be his last either.