Newsletter
Sign Up today for our FREE Newsletter and get the latest articles and news delivered right to your inbox.
Home » Angel Munoz’s ’70 Monte Carlo – Redlands 2019 Meat Up Spotlight 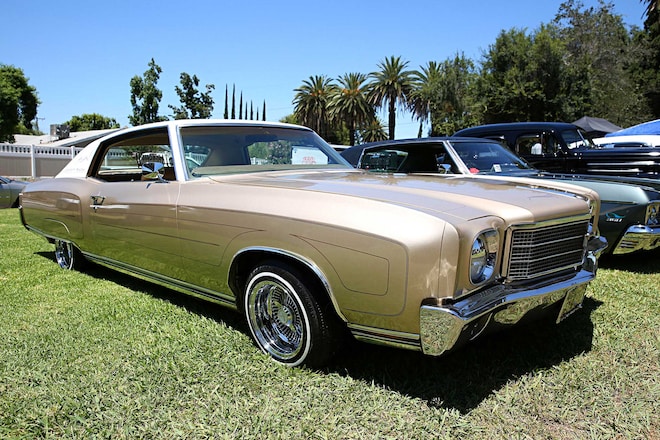 While seeking shelter from the heat underneath the Lowrider/Quaker State/Shell tent I felt drawn to this 1970 Monte Carlo parked next to the Established Ones Car Club tent. When I asked the members of the Established Ones who owned the Monte they told me it belonged to Angel Munoz who unfortunately could not attend the Meat Up. Luckily, Angel’s father and Established Ones President Roy was there to tell me everything I wanted to know about his son’s Monte Carlo.

Roy told me that the plan for the Monte Carlo was to give it a period-correct look and that other than some pinstriping, the 8-inch chain steering wheel, and two-pump setup put in by Tierra Hydraulics, they haven’t really done that much to the car.

Even though there isn’t that much done to this Monte Carlo it’s still quite an eye-catcher.