Newsletter
Sign Up today for our FREE Newsletter and get the latest articles and news delivered right to your inbox.
Home » An Epic 1981 Lincoln Continental Mark VI Build 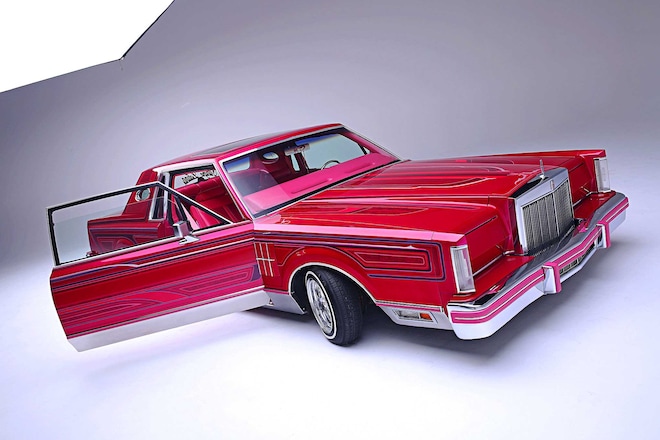 The city life is great, but growing up in a small town provides an intimate landscape that just can’t be beat. With a tight-knit community packed with peaceful vibes, the small-town life comes with many fringe benefits. Just ask Gilo Jimenez. He grew up in Livingston, a small town in Central California where the majority of the residents work at either Foster Farms or Gallo Winery.

But ask those same folks about lowriding and you might be surprised to find out that their love for lowriding is pure and unadulterated. You see, lowriding is a big thing in Livingston and Gilo’s group of friends are what actually influenced him to get active in the scene.

When he first began his journey, Gilo was unlike most who start off in lowriding. Whereas most have a specific year/make/model they want to build, Gilo was open for anything, so he began his search many moons ago when Craigslist and the Internet had barely emerged. At the time, searching for a car was a tedious task that left thumbs black and fingers sore. It required him flipping through the classified ads in the local newspaper and using what was considered to be the bible of used cars, the Auto Trader.

Now for those of you old enough to remember, flipping through the Auto Trader was fun. It required a weekly visit to the local magazine stand and there you would sit flipping through the pages and thumbing through a series of 1-inch-squared photos with a description that was limited to just about 30 words. When asked about those trivial memories, Gilo replied with a smirk, “I remember my dad and I traveling far to see cars from ads only to be disappointed when we got there.” In fact, the task was so tedious that the Auto Trader never did land him his dream ride. Instead, Gilo actually stumbled upon his dream ride by accident when visiting one of his friends during college. When he pulled up to his friend’s house he spotted a 1981 Lincoln sitting across the street. Although it didn’t have a For Sale sign, that didn’t stop Gilo from walking over and giving the car a once over. The body was flawless and the interior only had a few rips in it, so without hesitation he decided to knock on the door and ask if they would sell it. A few knocks, and a few seconds later, Gilo recalls the aftermath and said, “A lady by the name of Miss Woods answered the door and told me she would sell it. She told me the car was having engine trouble and when I asked her how much, she told me I could have it for $100.”

He jumped on the deal.

After taking the car back home and diagnosing it, the poorly performing engine was a result of a bad sensor. After replacing it, the car ran great. So he did what any college kid would do and threw in a stereo and slapped on a set of Dayton wire wheels. Immediately thereafter he drove the car like no tomorrow and enjoyed it up until he decided to repaint it. He then took the baby Lincoln to a local car painter by the name of Uvaldo Arroyo. Already a huge hometown sensation, and the go-to guy for lowriders in Livingston, Arroyo wasn’t really taking in candy paintjobs due to some health issues. As a result, he wound up working a 9 to 5 and only painted cars on Saturdays, but Gilo understood the conditions in a literal sense as the two both suffered ups and downs in their life that halted both of their abilities to constantly work on cars. In all, it ended up taking nine years to finish the paintjob. “We never stopped working on the car, regardless of what we went through.”

At the end of it all, Gilo ended up paying an envious $2,000 for the bodywork, shaved door handles, candy paintjob, graphics, and clear, and the result was this stunning car that now graces the pages of Lowrider. Even more interesting to mention was that the car was actually painted in the backyard in a car garage—a feat that wound up being the last paintjob Arroyo ever laid and the first one to make it out of the streets of Livingston and onto the pages of Lowrider. As if that weren’t precious enough, the paintjob also received one of the last pinstriping jobs by the late great Angelo Maisano, who died shortly after finishing this job.

After 11 years of hard work, the baby Lincoln finally hit the streets for the first time, and that monumental day would up being the day of his wedding. “I was so excited to finally have my car out on the streets.” Aafter a deep emotional pause, he continued by saying, “To get married the very same day made it such a memorable moment, and one that I will never forget and always cherish.” While it took over a decade to finish the car, the final product is one that is simply remarkable. Thanks to the support of his parents and wife, Carmen, he was able to make his dream possible while showcasing the true talent of the artisans found in Livingston, California.

Body/Paint
Uvaldo Arroyo shaved the door handle, door keyholes, car emblems, and antenna before laying fade, marble, and scalloped patterns in silver, white, red, blue, and purple under the magenta House of Kolor candy over a silver base. The late Angelo Maisano laid a variety of blues, purples, and pinks, along with silver leafing.