Newsletter
Sign Up today for our FREE Newsletter and get the latest articles and news delivered right to your inbox.
Home » Far From A Trailer Queen, This 1964 Chevrolet Impala Overcame Adversity to Hit the Streets 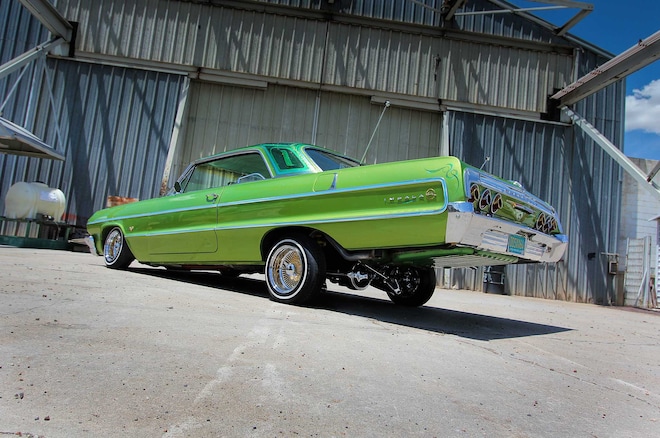 This ’64 Chevrolet Impala is what Alex Hutton had always dreamed of. It was the car he wanted and the car he’d customize in his head. Even when his father had a ’66 Impala, the ’64 was a void he always knew he’d have to fill. It should also come as no surprise that his infatuation with cars was strong as he grew up in a family surrounded by cool cars and even when he built his own customized ’65 Impala, he knew it was nothing more than a fling.

Out With The Old, In With The Newly Acquired

One day, out of curiosity Alex listed his ’65 Impala for sale—or for trade – and a few weeks later he received a call from an interested party in Colorado. The guy wanted to trade a project ’64 Impala for Alex’s done and ready ’65, so he accepted the offer and the deal was done.

The cars arrival marked the beginning of a three year journey and his first agenda was to get it running right. To accomplish that, the crew over at 505 Motorsports freshened up the motor while Alex ordered a catalog of chrome parts and accessories to dress her up. From there, he removed and replaced the old hydraulic setup and with everything dialed in, it was time for Kevin of Crown Customs to prep and block the body before painting it green.

Lady Luck Has Her Say

With the car complete and ready for pickup, an unfortunate—yet fortunate—incident occured. On the way home from the body shop, Alex was involved in a fender bender. He was distraught, but not defeated, so Alex brought the car back to Kevin and told him to repair it, but a spur of the moment decision made him say, “To heck with it, let’s go all out.” That decision made him shoot for the moon and he told the fellas to go full custom. From that point on, the shop combined a custom green mixed with gold micro flake. But it didn’t end there, the roof was flaked out with custom patterns while the undercarriage and suspension received much needed chrome.

But his bad luck wasn’t over just yet.

The old saying, “Bad luck comes in threes” held true to its word and it wasted no time reminding Alex. With the car complete, it was time to address the interior and that’s when Alex was burned not once, but twice by shops in Farmington. Tired of dealing with the B.S., Alex called up Gina at Ciadela interiors and ordered a complete interior kit which he installed with the help of his longtime friend James Yazzie. During the process, they replaced all weather stripping and along with it, a new sound system was installed with his brother Erik.

With his lowrider complete, the normal operating procedure would be to hit a series of shows or plan for a grand debut, but not for Alex. Instead, he took to the streets because in his own words, there are “No trailer queens here.”