Newsletter
Sign Up today for our FREE Newsletter and get the latest articles and news delivered right to your inbox.
Home » Once A Rust Bucket, this Custom PPG Green Pearl 1972 Chevy Monte Carlo Now Sports A Traditional Flare With A Twist 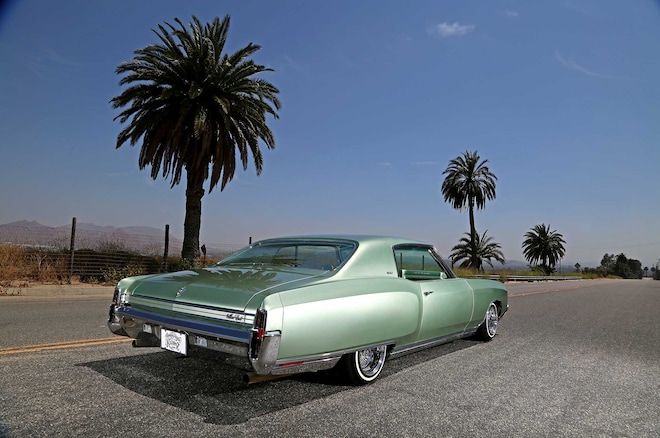 This 1972 Chevrolet Monte Carlo may be picture perfect, but its real beauty—as with all lowriders—can be found in the story behind the build. Owned by Alex Garcia of Arbuckle, Ca, this coupe flosses a pristine body finished in a custom PPG green pearl mix.

A far cry from how he got it, the story starts when his friend Mango showed him an ad on Craigslist. The listing was for a ’72 Monte Carlo with no pictures and on a whim, they called. The seller told him he had a potential buyer but encouraged him to check it out in the event the deal fell through. Alex agreed and shot down with his wife to take a look.

It didn’t take long for his wife’s sixth sense to kick in, and while she saw nothing more than a rust bucket, she could see that Alex saw potential in it. Knowing that his 39th birthday was right around the corner, she stepped to the plate and offered the seller an extra $500 on top of what the other buyer had offered and needless to say, the seller agreed and Alex was now the proud owner of a heap of rusted metal.

For the most part, the Monte Carlo ran well but required some mechanical work, so Alex took the car to a shop that had it all sorted out within four months. Once it was mechanically sound, he dropped it off to the paint shop only to pick it up nine months later in parts. “I got tired of dealing with multiple shops and knew I needed a one stop shop,” says Alex. At that point he connected with Ronnie Payan Kustoms who in turn handled the resurrection of this masterpiece.

Beginning with bodywork, the panels were straightened, the skirts were molded and to clean up the look, they shaved the keyholes, hood vents and molded the trunk. Out back, the trunk plays home to two Hoppos chrome pumps, Delta dumps and four Interstate batteries. Inside, the interior was treated to modernized stock interior featuring green leather and diamond stitched grey suede inserts.
In all, this build sports a period correct aura with a twist, and the build was topped off with a set of 13×7-inch Dayton Wire wheels with 5.20 Coker Premium Sportway tires.