Newsletter
Sign Up today for our FREE Newsletter and get the latest articles and news delivered right to your inbox.
Home » A Killer Lincoln Continental That Would Make A Made Man 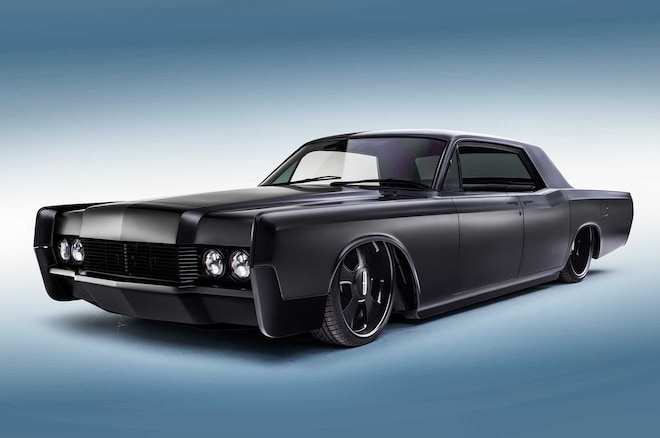 Meet Ty Reoh. He’s not a car guy—his words. But he saw a car he liked in a movie. “It’s not really a car movie,” Ty says, almost apologetically.

Actually Hit and Run kind of is a car movie. In it, Dax Shepard plays a former getaway driver who escapes his old partner by Tokyo drifting a mid-’60s Lincoln Continental. The Connie’s low. It’s black. It sits on big wheels. And according to the antics that play out, it has suds. But come time to pitch the dream, few shops bought the idea of a hot rod Lincoln like the one Ty saw in the movie.

But this deal wasn’t necessarily a slam-dunk. “What he described was kind of an old-school hot rod: It had a hood scoop, bigger tires, and a big ol’ motor so they could go out and burn rubber with it,” company cofounder Tim Divers says. “You know, like the cars that we built in our backyards when we were kids.”

“A guy like [Ty] isn’t going to be happy in a big old boat that doesn’t do anything except burn rubber,” he explains. “He’s got sandrails and bikes and snowmobiles and all. He plays hard.” Intrigued, Tim resolved to work up a plan with Ty.

That plan dispensed with the rear suspension altogether for one of Mobsteel’s four-link kits. The company made the front’s lower control arms but Jacob Strain fabricated the uppers. And it’s for a reason: Wilwood spindles.

“You can get disc brake kits for the stock spindles but they’re only 11 inches,” Tim says. “Ty wanted to run these big wheels and this car’s really heavy.” The answer: 16-inch Wilwood rotors pulled from the medium-duty truck market. “The calipers alone are like 13 inches long!” Tim enthuses. “So it actually needs those big wheels.” (In case you’re wondering, they’re 22×8 and 22×10 Bonspeed Vin Speeds with 245/30ZR22 and 285/30ZR22 Continental ExtremeContact hides.)

Scott Divers and Ian Richards fabricated an inner structure that ties the body into the crossmember and mounts the QA1 dampers inboard and ahead of the engine. Why? A 5.8L Ford, the supercharged beast from the 2013 Mustang GT500. It’s equal parts portly and powerful (730 lb-ft of torque and 750 hp at 6,000 rpm after overdriving the blower). Ford designed that engine to work exclusively with a manual transmission but Compushift figured out how to make it play with a 4R100 transmission.

The movie car probably didn’t need a hood scoop but this car could’ve used one. “If you go back into the pictures on the Divers website, you can see where we had the hood mocked up with a scoop,” Ty notes. “But we got away from it as the car got more elaborate.” Tim notes, “Sure, on a Camaro or Mustang or whatever (a scoop) is cool. But that scoop really didn’t go with the lines on this car. And a scoop sure don’t fit the personality of a luxury car.” In the end, the Divers crew literally built the car around the engine, which meant raising the center of the hood.

Reducing weight compares to increasing power, but with the benefit of better handling. The lowest-lying fruit was at the ends. “I should’ve weighed the factory bumpers and brackets,” Tim says. “They weighed hundreds of pounds.” After narrowing and tucking the bumpers, Scott and Wiggins Customs pulled molds and fabricated ones from carbon fiber.

Divers hid Easter eggs throughout the car, like the Kindig-It door handles. But the most dramatic change is actually between those handles. Lincoln never produced a hardtop Continental sedan but its convertibles have no pillar. So after reinforcing the body, Tim outfitted the doors with convertible glass, a chore that required reshaping the sail panel since the convertible frames drop off a little differently.

The “flat black” finish is actually a House of Kolor pearl with a Glasurit satin clear. And it wasn’t easy. “To keep that same sheen when you’re painting is really difficult,” Tim says. “If you get a speck of dirt in it, you can’t cut and polish it out the way you can with a shiny car. If you get a dry spot while you’re shooting you’re fudged (only he didn’t say fudged). Get a run? Damage anything while you’re assembling the car? You’re repainting the whole panel.” Kudos to Sig Schott and Rich Thayer for doing it (and doing it over).

Divers found additional ways to keep weight down within the interior. Ty liked the dash in another Divers car so Scott fabricated one from aluminum and carbon fiber (it mounts Dakota Digital VHX gauges). He also made the console like all the others, only Scott pulled a mold and made the final one from carbon fiber. “It’s not like we were trying to make this thing light—it’s never going to be,” Tim says. “But we wanted to at least make it closer to a performance car. We went toward road-course stuff but with a boat.

Nobody’s telling what the seats started as but they now wear black Alcantara. Scott hid a host of Alpine and Focal gear throughout the interior. CON2R made the steering wheel.

“I think we did the right thing going to all that extra effort,” Tim continues. “Every time you give a car to a client you know that they’re going to find things to fix. He tells me when you stab it, it has problems when it hits third. Well at that point you’re well over 100 mph. That just tells me what kind of customer he is. He never would’ve been happy with a boat with big wheels and a hood scoop.”

“The thing is simply amazing,” Ty summarizes. “I mean I still like the car from the movie and all but there’s no comparison.” One could make the case that they built the car that could’ve inspired a director like Dax Shepard—you could call it a prequel. Call it what you want but Ty calls it the car he really wants.

If Ty Reoh started this journey not a car guy, he sure ended it as one. No way in hell can a non-car person commission such an incredible car. For good or ill, you’re one of us now. Congratulations (I think…).