Newsletter
Sign Up today for our FREE Newsletter and get the latest articles and news delivered right to your inbox.
Home » Betting Big On This 1983 Monte Carlo That’s Remained In A Constant State Of Change 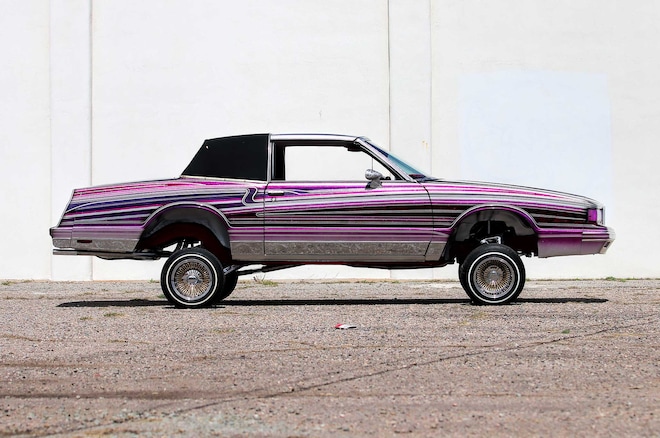 Introduced in 1970 and touted as the “personal luxury car,” this custom 1983 Chevy Monte Carlo is the epitome of that label. The car derived its name from the famous city in Monaco and has since become a piece of automotive history and a popular platform for lowriding and hot-rodding enthusiasts. Among the brand’s loyal fans is Orlando Martinez. He took his passion for lowriding and infused it into his own Monte and it all started in 1997 while searching for a new daily driver. He wound up finding this one in bone stock condition—exactly what he needed, though, that wouldn’t last long.

After seeing lowriders cruising around Espanola, he caught the bug, and that led to him picking up a set of Dayton wire wheels. This was the moment he was waiting for, but the purchase set him back, so the only way he could lower the car was by heating the springs. Since then, times have changed, and his passion—much like his money—became more significant, giving him the ability to fund his dreams.

Over the past 20 years, Orlando’s Monte Carlo has been transformed time and time again, but this latest look started as a frame-off. It began with him wrapping the frame, followed by the chroming of undercarriage components, and that includes the control arms and the boxed rear-end, both of which were also engraved.

While waiting on the chrome to return, he went through the hydros, making sure the triple Madd Hopper Pumps and 10 Batteries were ready for duty. The tired motor was pulled, giving him the ability to clean up the firewall. Once that was done, a chromed-out crate 350 was nestled into place.

Before upgrading the paint, Orlando added a Euro front clip, straightened out the metal, then contacted New Mexico’s very own Rob Vanderslice to set the car apart. Rob laid down what seems to be miles of tape and added fades in pink and purple, with a few gallons of clear coat required to cover up the lines.

It’s one beautiful Monte Carlo that’s been tearing up the streets of Espanola, and while it’s no longer a daily driver, it’s found a new purpose as an art piece on wheels. Additionally, the car was on exhibit at the New Mexico History Museum for a year, which, by our judgment, is a pretty big thing.