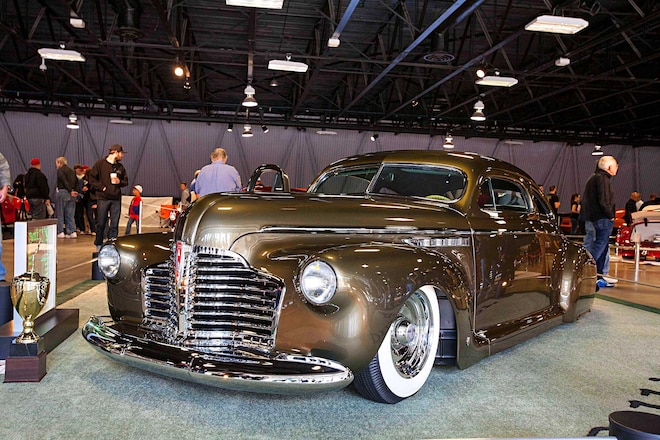 Regardless of the competition it was up against, the 1941 Buick Sedanette—Dillinger—crafted by Marcos Garcia and his crew at Lucky 7 Customs for Clifford Mattis was, in my eyes, the clear winner from the get go…and the judges seemed to agree, bestowing it not only the 2018 H.A. Bagdasarian Memorial World’s Most Beautiful Custom Award, but the cherished Custom D’Elegance Award, at the 68th Annual Sacramento Autorama.

Now, I may be a bit biased, what having personally known Marcos for the better part of the past 25 years, but I also know a drop-dead gorgeous custom when I see it—and Dillinger is it, hands down. From every aspect, Lucky 7 nailed it: from the exterior makeover (chopped with a sectioned deck, frenched ’41 Chevy headlights, narrowed ’41 Cad bumpers, flush-fit skirts, and Marcos’ signature stunning paint work, in this case a tri-stage pearl olive) to the interior (leather and print fabric upholstery by Gabe’s with a mix of period touches such as a reduced-diameter ’46 Buick steering wheel, ’51 Merc speaker grille integrated into the package tray, etc.) and especially the stance (modern IFS with air-assist and one-off 16-inch Buick-inspired wheels carved by EVOD and wrapped in Firestone bias-ply rubber). In other words, they served the full-course custom which, in turn, quite deservedly earned it top honors this weekend in Sacramento.