Newsletter
Sign Up today for our FREE Newsletter and get the latest articles and news delivered right to your inbox.
Home » ’64 Chevy Impala SS Convertible – Standing the Test of Time 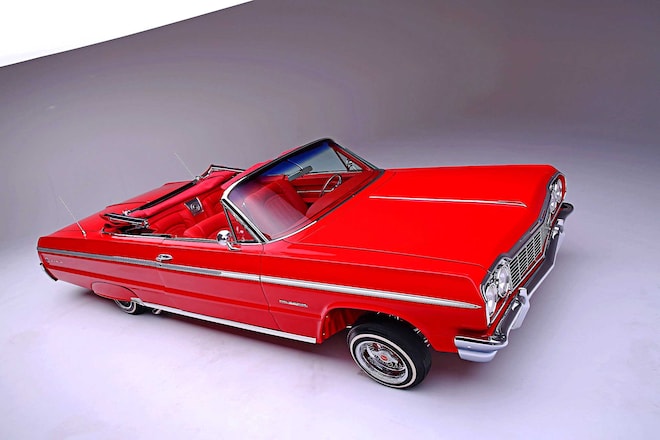 When Anthony first purchased his Impala back in 1994 the rag was restored to its original specs. It was a complete and fully restored classic Impala that was flawless. But that still wasn’t good enough.

Looking to change direction, he wanted to redo the Impala but friends said otherwise.

“People kept telling me to leave the car as-is, but I wasn’t going to be deterred from juicing my ride,” Anthony exclaims. Against his friends’ advice, Anthony went forward and had his ride juiced with a custom setup. Along the way, he threw in the mandatory sound system and hit the show circuit. In 1996, it landed a feature with Lowrider magazine and for the next 14 years he showed strong at venues like the L.A. Super Show in 1995 and the Las Vegas Super Show in 2000.

Known on the circuit as “Big Red,” the 1964 grew notorious for being active on the lowrider circuit. “It didn’t matter if it was the West Coast, East Coast, Midwest, or Down South, I hit them all,” Anthony says with pride.

After a decade of showing Big Red, it was time to put the car to rest and there it sat in storage for the next six years. Throughout those years, minor upgrades and trinkets were added but it wasn’t enough to stop him from doing a complete re-up. Soon enough, the car was dropped off for an LS engine swap, which was done by Street Machinery. Along with Hutter Performance, the two shops put in some serious work to get it to spec.

Moving onto the audio/visual department, Techni Craft Auto Service upgraded the sound system while his friend Brian constructed the fiberglass trunk enclosures that were color-matched in a brilliant red.

At this point in the build, Anthony was introduced to Jeff “Skinny” Forgione from Switches & Thangs in Toronto, Canada. “After meeting Jeff I knew he was the one to redo my whole car.” Forgione began by taking the body off in order to wrap and mold the frame. “He handled the entire undercarriage and installed a new hydraulic setup and finished it all off by repainting the car.” After Forgione was finished, he had it shipped to Los Angeles from Toronto and it came just in time for him to be debut it once again at the Majestics New Year’s Picnic. While at the show, Anthony linked up with Joe from California Upholstery and that led to yet another interior overhaul, which included a new top.

With the car back, it was time to retire the name “Big Red,” which is when Anthony came up with “Longevity”—a name given to the car because of how long he’s owned it. “Longevity has been part of my family since 1994. It was there when my dad died in 1999, when I met my beautiful wife in 2001, it was there during the birth of all six of my children, and, most recently, the death of my mother in 2016. That’s why I believe Longevity is a fitting name for this Convertible SS.”

Through thick and thin, the car has been an integral part of his life, and his family. Even with countless offers to sell the car, he never once thought about selling it. It’s survived 23 years as a part of the family and moving forward the car is sure to create even more memories with an owner who is more than proud of what he’s accomplished.