Newsletter
Sign Up today for our FREE Newsletter and get the latest articles and news delivered right to your inbox.
Home » ’53 Bel Air with Lowrider Style & Hot Rod Performance 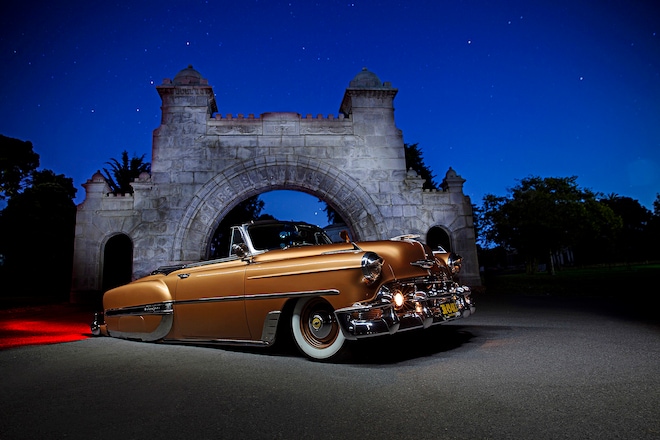 At first glance, Gary Villeggiante’s 1953 rag looks like something you’d see going low and slow, but that’s actually the farthest from the truth. In fact, his rag is a sleeper and a creeper of sorts. To be honest, his car may be pretty but get on the pedal and it moves like a bat out of hell and it’ll easily make enough donuts to feed the local police department.

Don’t believe me? Then check out his IG profile (@cadbomb) because it definitely does justice to the work he puts in. The first time I saw the video, I was speechless. I remember the rag with its top down and headlights on and after that he launched the 1953 into a violent launch that left me in the clouds.

So how did this bat out of hell come to be? Well Gary bought the restored 1953 after a friend sent him a link for it. To his understanding the car was built buy someone in San Diego and today it still looks the same, at least cosmetically speaking.

So with the help of his friend, Allen Magrini, the 1953 underwent a frame and suspension fabrication overhaul. They changed the drivetrain out, added an LS motor to it, and all the bells and whistles they felt necessary. When I asked him why he went with the style he did, his response was, “I like them when they look like low-lows but run like white boy hot rods.”

Since he and his wife don’t own new cars, it was essential that they have their classic in prim and proper condition, which is why there’s so much invested into it. To add to that, a car of this caliber might be a garage queen to many, but for Gary it happens to be his daily driver.

Don’t believe us? Then hang out at the Bay Bridge and you’ll see him riding to and from work. It’s yet another great example of how classic cars can be built to be dependable daily drivers with that necessary oomph.