Newsletter
Sign Up today for our FREE Newsletter and get the latest articles and news delivered right to your inbox.
Home » 2009 Mercedes S550 – 50 Shades of Candy 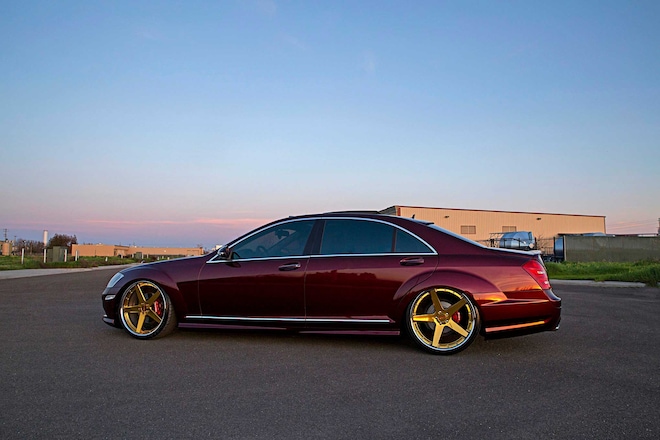 Since 18 years of age, Lalo has always been into cars. But his infatuation was more than just about the car itself, but more so the customization aspect of it. In his mind, there was nothing too sacred to be customized and since then he’s fixed up everything from old to new. During his time customizing, he’s done everything from muscle cars to lowriders to SUVs and even better is the fact that every car he’s built has been featured in a magazine—including this one here—his striking Mercedes S550.

“I’ve had the privilege of having every one of my cars featured in one magazine or the other,” the self-employed businessman says. This time around, he opted to build something that he could use as a daily driver and that’s when he decided on the Benz. While he may have enjoyed it for a few weeks in its bone-stock format, this too became another platform for his creative expression and vision. With his mind made up, and the itch to wild out, the first thing he did was drop it off to Prunedale Auto Body—the shop that has taken care of all of his cars.

Looking for the perfect shade of candy, the gents at Prunedale shot multiple panels with different shades of candy until they got a color Lalo was happy with. In the end, they wound up with a color that started with a black base topped with a red pearl, and then followed up with a House of Kolor Candy Brandywine. While the Benz was dismantled, they also decided to paint the engine cover and custom fiberglass trunk panels to match.

Once complete, the car was reassembled and the custom trunk panels were fitted with two 12-inch subwoofers and amps. The air suspension helps lay the car down while the addition of 24-karat gold dipped 22-inch AC Forged Wheels sets it off and seals the deal.

Now that the car’s done, this showstopping vehicle is ready for work and play. But even more important is how the car makes you feel. It’s an incredible sight you have to see in person and it flaunts the colors and appeal of that ’80s vibe with a modern twist. In the end, it’s a simple formula of Candy Brandywine, gold-plated wheels and a stance that completes the jaw-dropping look.