Newsletter
Sign Up today for our FREE Newsletter and get the latest articles and news delivered right to your inbox.
Home » 2008 Mercedes-Benz CLS550 – Lowrider-Inspired Benz 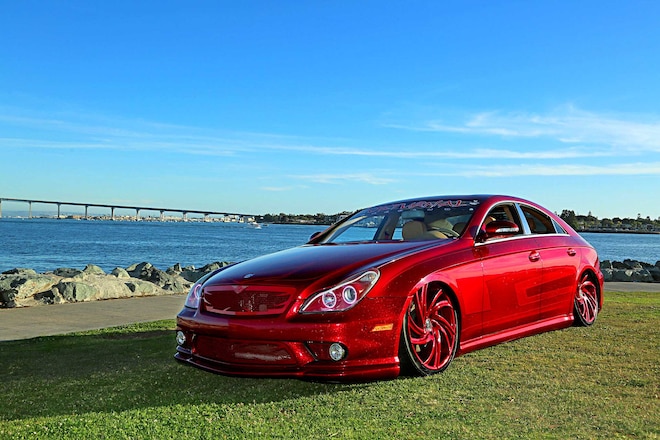 An avid car enthusiast and builder, Chris is no stranger to the custom car game. Having already owned several cars, Chris’ last build was a Dodge Charger he sold to a fellow Nokturnal Car Club member. But after selling it, Chris ventured off to the European side of cars and scooped himself up a 2008 Mercedes-Benz CLS 550.

The sedan’s raked roof and “coupe appeal” is what made the car famous during its initial launch, but Chris envisioned something more. Tired of being sidelined at shows, “it wasn’t easy going from a participant to spectator; it was a hard pill to swallow,” Chris says.

Feeling the need to get back in the game, he had an itch to represent his club once more, so he decided to do a few mods, starting with the paint. The formerly silver CLS was stripped and doused in a custom paintjob where J&A Autobody laid down a House of Kolor candy with lowrider-stylized patterns. Ridin’ Dirty then stitched up a crocodile and ostrich interior in red and tan, while the ride’s stance is managed by a full Hoppo’s air-ride system. When asked about his goal for the build, Chris says, “I wanted a European car with the lowrider flare.” In the end that’s exactly what he accomplished with this neck-snapping Benz that sports a flavor anyone could appreciate.

Interior
Crocodile and ostrich material in red and tan