Newsletter
Sign Up today for our FREE Newsletter and get the latest articles and news delivered right to your inbox.
Home » This 2007 Lexus GS 350 is a Luxury Player 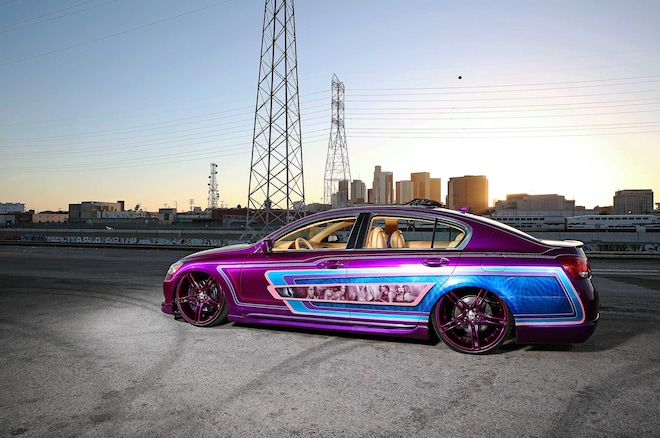 After spending well over a decade with Nokturnal Car Club, Mike has not only rep’d the club, but rep’d it well. Entry into the club all began with a tricked-out Candy Apple Red Escalade with enough bells and whistles that we actually featured it years back. From there, he felt a need for change so he sold the hulky SUV to get a new platform to work on. This time around he went with a Lexus sedan, and he’s since given the once family sedan a makeover worthy of yet another feature.

In 2007, Mike paid a visit to a local dealership and rolled out with a 2007 Lexus GS 350. With absolutely no time wasted, he began by dropping it off in Arizona at Chofy’s Airbrushing. Once there, the Lexus was taken down and prepped and that’s when Rene Alonso laid down an intricate paintjob that sported a multitude of colors, starting with a Candy Passion Purple paint. From there he followed it up with pink, blue, and light purple patterns flowing from front to back. Once done, he did a once-over on the car and felt the need to tie it all in, so he added airbrushing on both sides and had Riding Dirty Upholstery recreate the interior in peanut butter perforated leather.

Entry into the cockpit is bright and striking but the first thing you’ll notice are all the custom-made interior parts. The door panels, rear tray, and center console were molded out of fiberglass and painted to match the car’s overall motif. A month prior to the shoot, Mike was able to complete the car by adding a full sound system, complete with a fiberglass trunk that houses all audio equipment and the custom airbag setup.

As complete as the car may look, Mike still has plans to do more. But sitting at the fork in the road are two options: one, chrome the entire undercarriage of his Lexus; or two, sell it and build himself an old school. Either way, he is sure to create a car of no compare. We’ll keep you posted on his final decision because we’re sure that a third feature will come sometime soon.

Features A One Stop Lowrider Garage