Newsletter
Sign Up today for our FREE Newsletter and get the latest articles and news delivered right to your inbox.
Home » 2007 Dodge Magnum RT – Swagnum 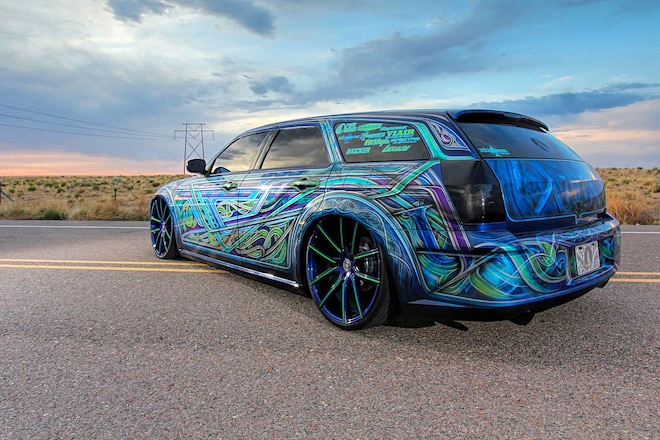 Not every car enthusiast dreams of restoring a classic car, and who can blame ’em? An older car comes with its fair share of headaches and some folks just aren’t up for the hassle or the headache. Besides, nothing beats the rattle-free reliability of a new car that’s ready to roll. But that doesn’t necessarily mean they aren’t inspired by classic cars. Take Rudy and Sonia Lopez as a prime example. For them, their dream was to own a Dodge Magnum, but when it came time to address the paint, they were inspired by styling cues and patterns primarily found in lowriding.

Their story begins in 2010. While driving past a car lot, Rudy spotted a used Dodge Magnum that was mildly modified. A few hours later it became a topic of discussion, and by dinner’s end the couple had agreed to pull the trigger. So the very next day Rudy bought it and brought it straight home.

Given his appreciation for lowriders and classic cars, Rudy was itching to add his own custom touches, which is when he decided to link up with painter Rob Vanderslice. The pair tossed around some ideas and then executed, which required the use of hundreds of feet of tape to lay it all out. As they laid one pattern over the next, the intermingling of colors created a symphony of patterns, colors, and shading that ultimately created what you see here.

The striking finish of the interior was so loud that it made the interior a boring habitat, so he had Chito’s Upholstery go all-in. The factory fart catchers were revamped with blue leather and diamond-stitched black suede accents, and during the process, a pair of 12-inch ‘woofers and a custom box was installed before Aaron Gonzales airbrushed a mural on the lift gate.

To finalize the build, Rudy color-matched a set of 24-inch Lexani wheels and to alleviate what little fender gap was left, he had an air-ride system installed. In its final form (at least for now), the once mildly modified wagon was transformed into a show-worthy wagon that transports Rudy, Sonia, and their new twin babies around the show circuit. Ultimately, it’s a ride that represents the family’s dedication to the car show scene and a formidable competitor worthy of wearing the Nokturnal Car Club plaque.

It’s also a great story about car culture and how we draw inspiration from everyone around us. Especially in this day and age of social outrage, it’s good to see that the car scene still promotes the love, camaraderie, and respect of all builders, regardless of what you choose to customize.