Newsletter
Sign Up today for our FREE Newsletter and get the latest articles and news delivered right to your inbox.
Home » 2006 Lexus GS300 – Swift Inspiration 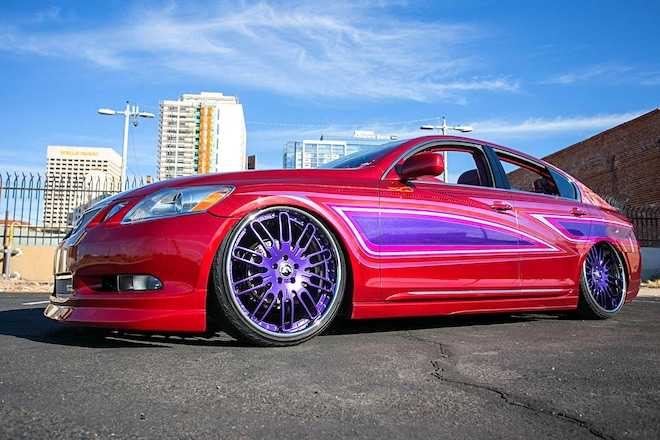 The cars we create inspire the next generation of builders. Whether they borrow a color tone, or mimic a pattern, they say imitation is the sincerest form of flattery, and such is the case with Abel Verdugo. Years back when he built his Dodge Charger he found inspiration through a fellow car club member’s ride and it gave him a sense of direction.

In the end he wound up calling the car “Aftershock” and it was patterned after another vehicle in his club, which earned the moniker “Chop Lex,” a car that he’d admired for years. Fast-forward a few years later and the unthinkable happened: he found out that “Chop Lex” was up for sale. Being that it inspired his own build he took to the bank and wound up purchasing the car that is being featured here.

The Lexus GS300 came customized from top to bottom with the main focal point being the one-of-a-kind chop-top roof. The car was covered in various candies, pearls, and flakes with patterns running throughout the car. The California Upholstery interior followed the paint scheme by adding layers of multicolored leathers and mimicked the vehicle’s patterns. A fiberglassed center console and trunk was then added to showcase a Kenwood stereo system with monitors, Fosgate subwoofer and amplifiers. Even a custom RideTech air-ride setup was installed in order to accommodate the newly installed Forgiato 22-inch wheels with Pirelli tires.

In many aspects we envy Abel. He did not have to go through all the headaches that come with building a custom ride, but in the end, the fact remains that it doesn’t matter whether you built it or not. What matters is that you get out there and lowride and represent Swift Car Club with the continuous support of his wife, Michelle, son, A.J., and daughter, Jordan.

Body/Paint
Candy and pearl patterns with pinstriping and murals

Ask Jaime Gonzalez about his 17 year Impala build and he’ll tell you, “This is a labor of love! The journey was challenging but it’s one that I would never change or forget!”