Newsletter
Sign Up today for our FREE Newsletter and get the latest articles and news delivered right to your inbox.
Home » 2006 Chrysler 300 – Leaving the Bench 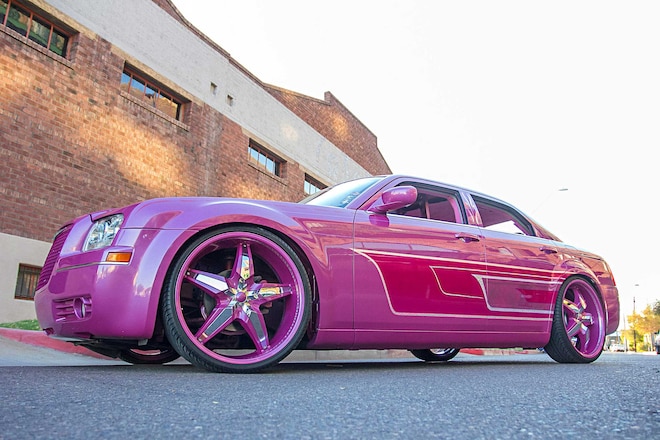 Since its inception in 1955, the Chrysler 300 “letter series” has gone through a plethora of changes. The first generation burst onto the scene as one of the quickest cars of its time with a whooping 300 hp—thus the namesake. Fast-forward to present day and Chrysler has dished out 10 generations of excellence and reclaimed the title for the 300 as a premium family sedan. One by one they’ve rolled off the assembly line and headed to their awaiting owners, and while most have lived out their lives as advertised, a select few have been saved from the obscurity of grocery store trips and weekend soccer games.

The lucky ones, like this one here, have gone on to live a customized life with trips to paint shops and weekend car shows. Stephanie Ortiz, of Chandler, AZ, had grown tired of being a spectator of her husband’s hobby. “I knew I wanted to be alongside my husband and the Nokturnal Car Club and not on the sidelines,” Stephanie says. So when the opportunity arose to purchase a Chrysler 300 from her sister-in-law, she knew it was time to get in the game. First on the list was a trip to HL Auto Customs where the car was covered in Bubble Gum Pink with pearl and micro flake. Chavo Pinstripes would come in to add his mark with Hot Pink, Fuchsia, and Magenta patterns. As a supporter of the “Save the Tatas” and “Think Pink” campaigns, which promote breast cancer awareness, Stephanie decided to carry her “Pink” theme into the interior by transferring the outside paint scheme onto the fiberglassed dashboard and door panels. She even added pink Chanel inserts to the white leather seats. With the engine receiving a similar treatment, Kicker stereo system wired, and custom 22-inch wheels also getting the same dose of pink and silver leafing found throughout the car, it was finally time for Stephanie to leave the bench and step into this game we call lowriding.