Newsletter
Sign Up today for our FREE Newsletter and get the latest articles and news delivered right to your inbox.
Home » 2005 Dodge Magnum RT – That Wagon Life 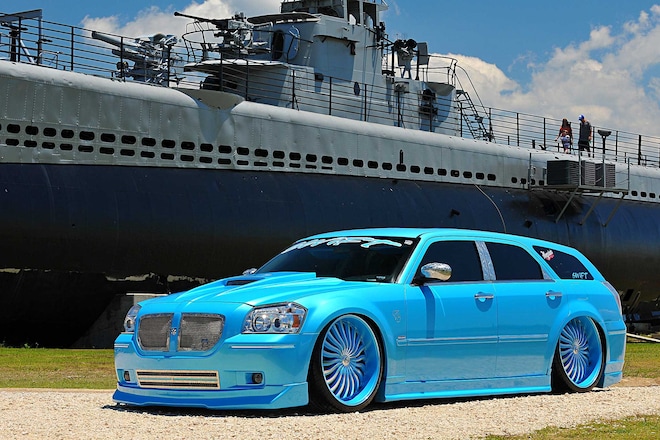 Although the Dodge Magnum was first introduced in the United States in 1978, it only lasted one year in production as a coupe before being pulled. In 2004, the Dodge Magnum nameplate was revived, except this time around it was brought back as a rear-wheel-drive station wagon that struck a nerve with car customizers globally.

For decades, the station wagon has gained notoriety as being a family car, but its imposing size and large canvas also made it a target for those looking to customize it. But for one “West Coast Southern Boy,” who was raised in Los Angeles but moved to Alabama, station wagons have been his life. At the age of 18, he started off with a 1987 Ford LTD station wagon that he purchased for $300. “It was the only thing I could afford in my price range,” Antwan Todd, owner of this Magnum, says. In the beginning it was his trusty LTD that would serve him as a mode of transportation and source of inspiration.

Looking to change his life, Antwan decided to study at Nashville Auto Diesel College because he wanted to learn how to build and customize his own vehicles. With his loyalty and attachment to station wagons, it came as a surprise when Dodge released the brand-new Dodge Magnum in 2005. “Most of my friends were customizing Chargers or Chrysler 300s,” Antwan adds. “I had this vision of being different and going a different direction.” Antwan purchased a 2005 Dodge Magnum RT straight from the Dodge dealership.

Although the build started out slow, Antwan did minor upgrades while he continued to pay off the new Magnum. After the five-year loan was satisfied, Antwan focused his funds on building the Magnum to new heights. As a trained and efficient painter, Antwan used a custom mix of pearls from Xotic Colours to set the Dodge apart from the rest. A custom hood and body kit was added to stand out. The next step was bringing the Dodge closer to the ground. Antwan enlisted J&J Kustomz in Theodore, Alabama, to add a full air-ride suspension. Once the custom air-ride setup was installed, Antwan found it difficult to add a custom stereo system because of the lack of space left. He began looking online for different installs and happened to come up with a unique, one-of-a-kind idea.

“Sexy Maggie” would take on its name by having a woman fiberglassed inside the rear of the Magnum with speakers for her bottom. Keeping it a secret from his wife Janel, he brought the Dodge to Miracle Auto Sports where Antwan and the owner Archie put their ideas together to create something that had never been done before. Antwan decided to add high heels where the woman’s feet were mounted, so he measured them and went to the store to purchase high heels. In a moment of absent-mindedness he left the receipt at home where his wife found it. The “We need to talk” call came next and Antwan had to reveal that the heels were for his car and not another girl, which nearly ended their marriage. Once the inside stereo setup was complete, Antwan sent out everything chrome for engraving where Lugos Engraving, Engrave It Inc., and Krazy Kutting all had their hands in engraving.

Antwan wishes to thank is VERY understanding wife, Janel, for not killing him and allowing him his creative vision. He also wishes to thank Donald Craig and Dennis Pugh Jr. for all the labor they put in as well as Archie Wright at Miracle Auto Sports for bringing to life his unique vision. A special thanks goes to Bobby Washington at Its A New Look Upholstery as well as Jonathan Harvison at J&J Kustomz for the hard work. He’d also like to thank all the sponsors and friends and family and his Swift club for always being there. Sexy Maggie is one car that once you see it, you won’t ever forget.