Newsletter
Sign Up today for our FREE Newsletter and get the latest articles and news delivered right to your inbox.
Home » 2002 Mercedes-Benz CLK320 – A Foreign Affair 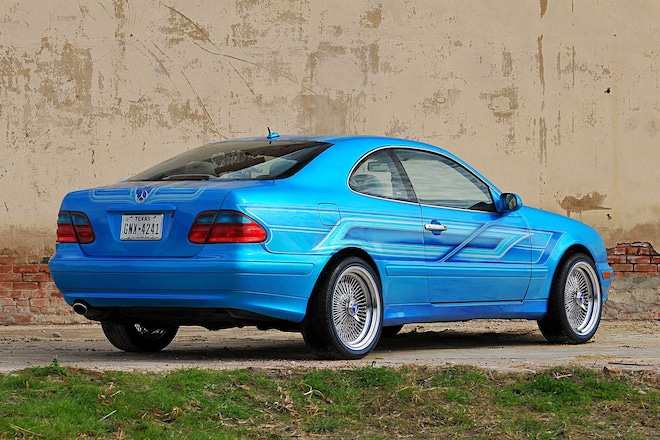 Doroteo Arzola of Dallas refers to his 2002 Mercedes-Benz CLK as “Foreign Affair”-and it’s with good reason. When he purchased the Benz he had been working on his 1985 Cadillac Fleetwood. “I needed a new daily driver while building my Caddy,” Doroteo tells us. But as many of us know, daily drivers never really remain just that.

When he first spotted the Benz, the entire rear end had been damaged from a collision. It had been sitting on the front lawn of a neighboring home while awaiting a tow truck to haul it to the junkyard, and since he had experience with autobody repair, he struck a deal with the owner and immediately began tracking down the necessary parts. During the process he replaced the front bumper and two front fenders. The largest part of the job was pulling the metal from the rears to massage all the new panels back into place. Once ready for paint, he was shocked by the cost of the factory paint and instead opted for a full custom paintjob from his friend Carlitos Rios.

Rios started with a silver basecoat and then patterned it out along with Doroteo. From there House of Kolor’s Oriental Blue was sprayed over the patterns, followed by a coating of clear infused with a blue/green mixture. At this point the Benz went from being a daily driver to a show as his Cadillac sat in envy watching the foreign affair unfold.

With the exterior fresh and dressed like a million bucks, it was time to address the ragged interior, so he sent the seats out to Texas Auto Upholstery for a full leather and suede treatment. His daughter, Leila, then suggested the headliner be wrapped in suede along with the door panels, and once she approved of the final outcome, his son was next up in line to provide some input. He told his father, “The car needs boom,” and that’s when his son got busy building a custom subwoofer box. With the custom trunk set up, a set of 16-inch actuators were welded into place, and at the touch of a button the truck rises to expose the inner workings. Not looking to bag of juice the ride, Doroteo then tossed in a set of lowering springs and fitted wheelwells with a set of 17-inch OG wire wheels mated to a set of Vogue Tyres.

What was certainly destined for a junkyard is now being displayed from show to show, and after taking home numerous First Place awards, Doroteo is the first one to admit that he never expected the Benz to come out the way it did. When asked about the Cadillac he pushed to the side Doroteo says, “I felt like I was cheating on my Cadillac with my Benz. It’s like I had a foreign affair that turned out for the best.”

Joe Ray and Lowrider Garage take you behind the scenes with Lowriderclothing.com