Newsletter
Sign Up today for our FREE Newsletter and get the latest articles and news delivered right to your inbox.
Home » This Father-Son 1998 Lincoln Town Car Project is the Perfect Vegas Strip Cruiser 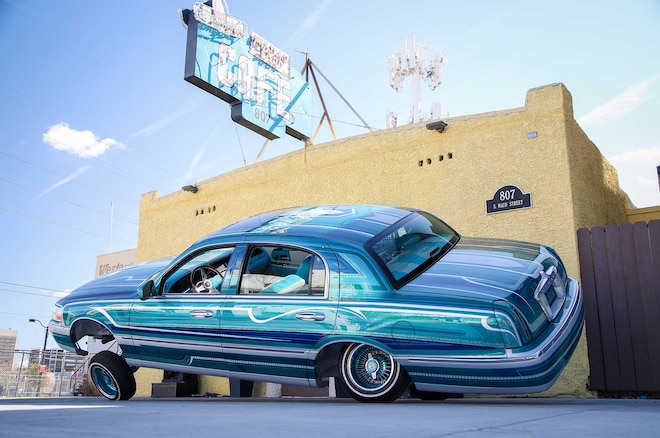 The best thing about building a lowrider, like this 1998 Lincoln Town Car is watching the personality of your project unfold with every design step. Some builders start the breakdown of their lowriders with a specific plan and some have ideas as to what the finished product will look like, but then, as each step is completed, their vision often evolves.

When Shawn Johnson picked up this ’98 Lincoln in stock form, he originally bought the car as a project he could work on with his son. With the intention of using the Lincoln as a daily driver, Shawn figured it would be a practical choice—though no one else seemed to understand why.

Keeping the engine and body in stock condition, Shawn had the complete undercarriage chromed by Street Fame in California. The brand-new hydraulic setup was installed by Black Magic Hydraulics and included three chrome pumps, Accumax solenoids and Delta dumps.

This Lincoln really started to come to life when Felix Designs in Las Vegas laid down the House of Kolor Kandy Teal and Ice Pearl paint job. Zack then added more to his creation with different patterns throughout the entire car, including striping, fingerprints, fans, fades and leafing using blues, greens, silver and gold.

The paint job was accented on the side mirrors with custom murals of the nuns from the movie The Town, by artist Tony Coronado from California. After all the paint was completed, the car was crowned with a custom interior using grey and teal vinyl and suede by Wizard Customs in Las Vegas.

Once Shawn and Shawn Jr. were done building this car, they were able to finally prove to everyone that it was meant to be misunderstood. It was a father-son project that evolved from being a basic driver into a show car worthy of turning heads along the Vegas Strip.

As Shawn’s first car ever to have a hydraulic setup, it was going to go through another change soon after completion. As told by Shawn Jr., his dad’s first time three-wheeling led to the bumper being “ripped off” on a turn he took at 40 mph. He wasn’t too worried because this father-and-son team knows what needs to be done for this once-misunderstood Lincoln.

Body/Paint
Zack of Felix Dezigns laid down the House of Kolors candy teal with intricate fades, fingerprints, fans under the blue, green and silver leafing and pinstriping.