Newsletter
Sign Up today for our FREE Newsletter and get the latest articles and news delivered right to your inbox.
Home » 1998 Lincoln Town Car – Life’s Golden 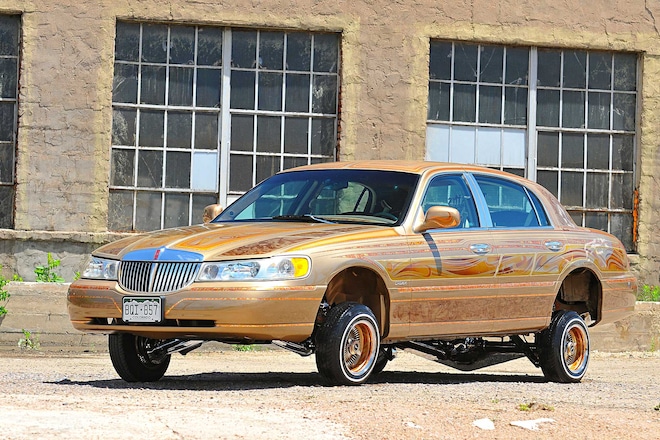 There are certain things in our lives that take us from bad to good, and for Daniel “Suga Dee” Gallardo, that motivation and inspiration came by way of lowrider culture. Born in Alamosa, Colorado, Daniel wasn’t originally headed in the wrong direction but when his family moved him to Highland Park, California, things changed. “I started getting in trouble and couldn’t stay out of it,” Daniel tells LRM. “That’s when the lowriders took over.”

Although too young to drive, he was fascinated with the culture and often fantasized about owning a custom car. Lowriders were all around him and the influence created a new goal and a fresh new vision. When he was finally able to drive, he purchased his first lowrider, a Chevy truck on Daytons. He wound up joining Majestics Car Club and, as he kept getting more involved in the lowrider culture, he eventually purchased a Cutlass that was built to be a hopper.

One day while scouring the web, Daniel found a unique Lincoln that caused him to change his mind. The Lincoln was built in Compton, California, by Nene, a fellow Majestics member, but had long been traded away. Daniel’s loyalty to his club and his love of the Town Car propelled him to offer a trade for his hopper.

The history on the Lincoln was rich, having been painted and built by some heavy hitters in the lowrider community. Years later he made the move back to Colorado. He packed up all of his belongings—including his car—and for the past four years Daniel has worked hard at his warehouse job and credits his new success and prosperity to the acquisition of his Lincoln. “Since I moved back to Denver everything has come together,” Daniel says. “I met my wife and my great Majestics family.”

He wishes to thank everyone for their support, including his beautiful wife, Miranda, and all his Majestics club brothers worldwide for pushing him to keep striving to be better. Some would say that he saved the Lincoln Town Car from being forgotten, but it might be that his new Lincoln named “Cream” saved Daniel from bad choices and made him focus his life on the better things.