Newsletter
Sign Up today for our FREE Newsletter and get the latest articles and news delivered right to your inbox.
Home » 1996 Chevrolet Caprice – Worth The Wait 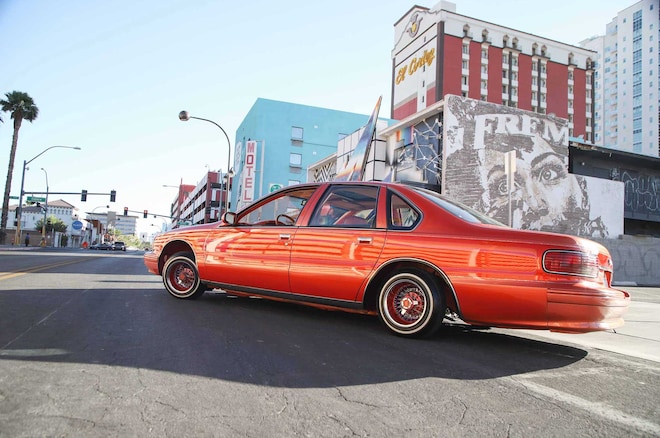 Life in Las Vegas is unique, bold and thrilling. Sitting in the middle of the desert, the world-renowned city is famous for excess, glamour and gambling. But if you search beyond the bright lights of the Las Vegas Strip, you will find a thriving car culture that has survived the many phases of Sin City over the decades. Vegas native and lowrider enthusiast Darryl remembers the early days of lowriding as if it were yesterday. In 1965, when Elvis was king and the mob ruled all, Darryl saw his first lowrider cruising through the neighborhood. The memory of this moment stuck with him until he was old enough to drive and buy his own car. After graduating high school in 1978, Darryl purchased a ’77 Cutlass that he would go onto customize with hydraulics. It was that same vehicle that later joined him as his journey with the Royals car club began back in 1984.

Wanting something different, his friend was selling a ’96 Chevy Caprice and the car was affectionately dubbed “Worth the Wait.” Darryl immediately began overhauling the vehicle from the inside out. The stock engine tuned up with a few add-ons and he immediately turned to the suspension where he installed Black Magic hydraulics complete with two pumps, three dumps, five switches, six solenoids and six batteries to really make the ride jump. On the outside, Worth the Wait was dipped in a candy orange paint reminiscent of the warm desert sunsets of Las Vegas. From there, Felix Dezigns went all in and applied custom pinstriping and patterns using various glitter orange tones and hot pink.

Inside, the orange motif was carried on over with an interior created by Big Bill, and the final blow came from the hammer when the custom orange Zenith wire wheels were hammered on. Since its completion, Darryl has enjoyed competing at shows, and to date, he’s taken home more than 30 trophies. And while he’s come a long way from a kid once mesmerized by lowriders, Darryl knows for a fact that lowriding is a therapeutic lifestyle that gives him a chance to flaunt his creativity and a lifestyle he’ll live up until the wheels fall off.

Body/Paint
Bumper Medic prepped the body for Zack Felix to lay down a multitude of patterns and pinstriping.