Newsletter
Sign Up today for our FREE Newsletter and get the latest articles and news delivered right to your inbox.
Home » 1995 Chevy Camaro – Raising Awareness 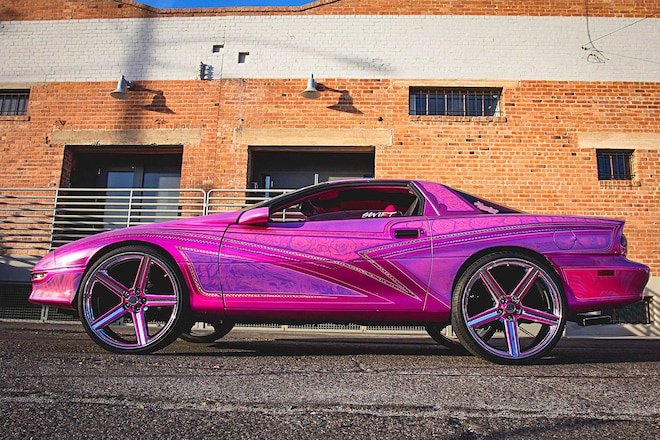 As a child, Geneva Wilson was no stranger to lowriding. She’s been around it, felt its impact, and at a young age became a fan of the lifestyle she would soon take part in. Although she was a fan of all makes and models, when it came time to build her own ride all she knew was that it had to be something unique and something that would stand up not only to the critics on the street but stand for something meaningful. So in honor of her grandmother, she decided to build a 1995 Camaro that was anchored around a breast cancer awareness theme.

The heart and soul of this project was placed in the hands of local painter Chavo, who laid down the various tones of magenta, pinks, and purples. From there, he added a variety of silver leaf pinstripe lines, patterns, murals, and floral designs to tie it all in. The “pink” theme was carried into the interior where Chuy Rodriguez joined the pink vinyl and black inserts together, all the while fabricating custom fiberglass door panels. To accommodate the massive 24-inch IROC wheels, the vehicle was lifted 4 inches while the wheels were accented with some additional flavor. And while the modifications on this Camaro are heavy, it’s easily outweighed by the impact of those who see it.

In all, it’s a rolling reminder that cancer can affect any one of us, so in turn we must all remain vigilant and aware with regular screenings and prevention.