Newsletter
Sign Up today for our FREE Newsletter and get the latest articles and news delivered right to your inbox.
Home » 1994 Cadillac Fleetwood – These Are The Good Times 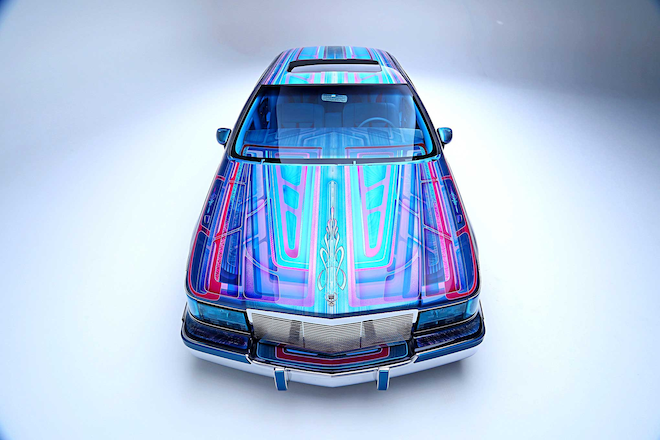 In the simplest form, Harvey Reyes is a staple of the Bakersfield lowrider community. For almost five decades, he’s been producing some of the finest lowriders to come out of Bakersfield, and it all started in the late ’60s. It’s what he loves, it’s what he breathes and it’s something he’s successfully done over and over again.

This time around Harvey comes back with a 1994 Cadillac Fleetwood that originally belongs to his son Cirilo. It was a project his son started, but a demanding job and life’s responsibilities came first, so he took over the project. Harvey first sent the car out to Stone Cold Kustom to have it stripped and painted and then leafed by Lamberson.

Whereas some “tastemakers” and “pioneers” are self-appointed, Harvey has earned his stripes officially, and when asked about being inducted as a Lowrider Hall of Fame recipient, he replied, “As a Lowrider Hall of Fame inductee, I continue to find ways to keep building cars and keep the lowrider movement [pushing] forward.” He is also proof that age is irrelevant in the lowrider game, and if anything, it’s the historical knowledge and consistent practice that makes him a game changer that has always commanded the respect others demand.

He also backs up his words with work, and with this Cadillac, he’s definitely proven himself worthy of the accolades. He called the car “Good Times” named after the 1979 smash hit from Chic because every time he cleans his car, it reminds him of the good times he had during the ’80s, and after 42 years of marriage, Harvey celebrates not only a happy life, but a happy wife who has been there to support his obsession with creating smash hits including this one here.