Newsletter
Sign Up today for our FREE Newsletter and get the latest articles and news delivered right to your inbox.
Home » 1994 Cadillac Fleetwood – The Dream Reaper 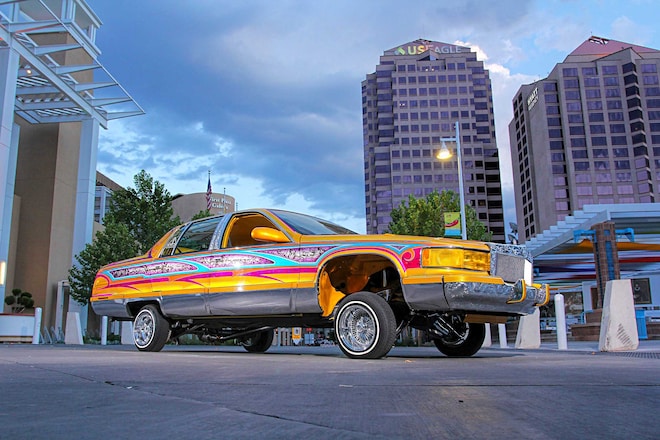 Robert Surdukan is no stranger to building lowriders, as he has built a few over the years. One of those cars was a 1986 BMW with a one-off Rob Vanderslice paintjob and gold undercarriage. The car, nicknamed “Str8 Drippin,” was even featured on these pages in 1998. Robert doesn’t like subtle, he likes over the top. So when looking for a new ride he wanted something to fit his style.

He came across the Caddy you see here on Facebook when looking through pictures of the 2016 Cadillac Fest. It immediately caught his eye. After contacting the owner, Dion Giuliano, a deal was struck and the Caddy had a new home. The car was originally built in 2012 for SEMA to showcase the Kal Koncepts shop and House of Kolor. After the show it went into storage for four years. Kal Koncepts is no stranger to the custom car world, so when building something to showcase their work they wanted to go overboard a little; nothing was left untouched on this Caddy.

The car was completely gutted and a few body mods were done and then it was onto paint where their skills really shine. The main color of the car is Pagan Gold Kandy but a majority of the car is covered in purple, orange, magenta, blue, and silver graphics. World-renowned airbrush artist Craig Fraiser, who is also part of the Kal Koncepts crew, airbrushed skulls and murals all over, including the ‘jambs. The custom paint didn’t stop at the exterior either. After gutting the interior, the dash, rear deck, and door panels were all smoothed and painted and the graphics continue inside to match. Victor Monge at R&A Upholstery wrapped the rest of the interior and the seats in black and yellow glitter vinyl to add just a little more pop.

The trunk was treated to the same love. After Nino Brown installed an all-new Low Life Hydraulic setup, the Kal Koncepts crew fabricated custom panels to cover up all the goodies. These panels were also custom painted to match the rest of the car. The undercarriage was not left out either; the frame was boxed and reinforced. The rearend was shortened and chromed to allow it to lay out with skirts on. The front control arms were extended, boxed, and engraved before getting re-chromed and 13×7 diamond-cut spokes round out the undercarriage. While the A-arms were getting engraved Robert decided to send out a bunch of other parts to get engraved as well. Kutty Engraving did the bumpers, bumper fillers, pillar covers, and numerous other parts throughout the interior. They also built a custom-engraved grille to add just a little more bling. This car is definitely an eye catcher and draws a crowd wherever he shows up. As with any project it is never complete—his list of upgrades is long!

Interior
Yellow/black vinyl fiberglassed and painted back deck and dash