Newsletter
Sign Up today for our FREE Newsletter and get the latest articles and news delivered right to your inbox.
Home » 1994 Cadillac Fleetwood Brougham – A Sick Classic 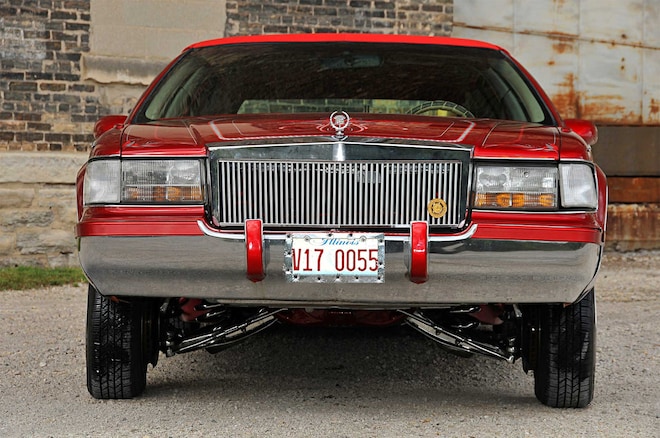 When Victor “SickO” Alcantara was asked what he wanted to name his Cadillac, he responded without hesitation and said “ClassickO.” In short, it’s a name that combines the words “classy” and “sick” into one word, and it’s a homemade term that best describes his Fleetwood build.

At the age of 13 Victor was sucked into the lowriding culture. His enthusiasm was so strong that he asked his parents to buy him a lowrider bicycle-one that he still owns today. Soon after he found himself searching for a fullsize ride to work on and that’s when he ran across a 1994 Cadillac Fleetwood that was located a few hours away in Joliet, Illinois.

When he got there, he paid the asking price. The first thing he noticed was that the tires were bad, so he replaced them before the ride home. An hour into his drive, one of the cylinders started leaking, so he pulled over and added some oil. As if that weren’t bad enough, he soon experienced a blowout. And, bad luck typically comes in threes, so, go figure, he was pulled over for having no plates or insurance when he was just 15 minutes from home.

During the build process, Victor soon befriended “Tank” from SolitoS Car Club of Chicago, and with his help the Cadillac went straight to a local named Mikey-the one responsible for switching up the entire hydraulic setup to a safer and more stable system. The next step in the build was to have a complete color change done by Reyes Custom in West Allis, Wisconsin. The factory gold paintjob was replaced with a bright red paintjob complete with a red canvas top. From there, pinstriper Chavo was flown in from the Arizona to lay down some pinstripe on the Caddy.

At this point, the Fleetwood was ready to show its wings, so Victor brought it out to a local car show. As Victor’s bad luck would have it, the engine blew on the way there, so it was back to the drawing board as Victor and his club members lent a helping hand to rebuild and replace the motor. Reyes handled the interior change and Victor was able to completely transform his big body after all his bad luck.

Victor wishes to thank his SolitoS club members for their help and support in making sure that his dream was completed, as well as his good friend Horacio Rosiles for the mechanical help. He wishes to thank Reyes Customs for their masterful work with the transformation of the Cadillac.

As a single father of beautiful 8-year-old Natalie, Victor has to lead by example and show that your dreams can come true no matter what obstacles are in the way. As his first lowrider car, Victor has gone above and beyond all expectations.