Newsletter
Sign Up today for our FREE Newsletter and get the latest articles and news delivered right to your inbox.
Home » 1994 Cadillac Fleetwood – Back In The Game 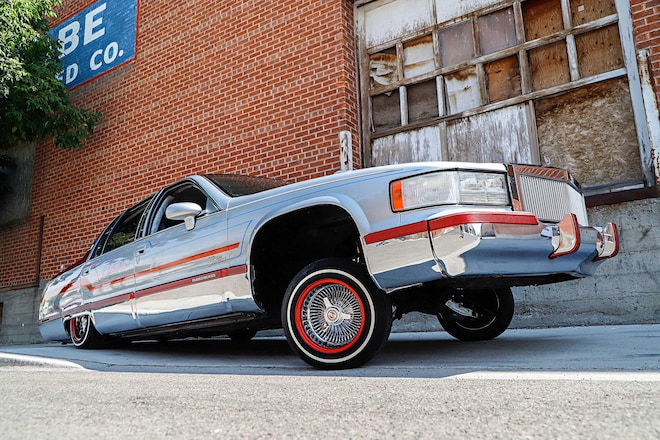 The Cadillac Fleetwood was, at one time, the longest production vehicle made in the United States. But the unfortunate cease in production in 1996 left many a Cadillac aficionado craving more. In 1993, the Fleetwood had recently received a restyled exterior, and the switch back to rear-wheel drive would make this car the perfect lowrider.

For years Victor Hernandez coveted this make and model but it never seemed to be the right time to get one. For Victor, living in Utah can sometimes become a challenge when looking for the next lowrider to build. His 20 years of lowriding experience, however, taught him that patience is the key for any project.

The time eventually came and a 1994 Cadillac Fleetwood was finally sitting in his driveway. Victor called upon his fellow Goodtimes Car Club members, who together would bring this luxury sedan “back in the game.” A host of candy colors were to be selected, from Apple Red to Tangerine to Magenta. The Cadillac was semi-covered in a multitude of patterns and pinstripe lines. “I wanted to go a different route,” Victor says, referring to why he selected to only pattern certain parts of the vehicle. The exterior color combinations carried onto the interior, which were molded and painted. The rest of the interior was redone in mist gray leather with cloud gray suede inserts, mimicking the original stitching.

Victor and crew did a lot of the work themselves, including the audio system consisting of MTX amps, mids, and subwoofers. The two-pump Black Magic hydraulic setup showcasing four dumps, four switches, and five solenoids was installed at Victor’s garage. The Cadillac took over 18 months to complete but Victor and “El Guapo” are just happy to be back in the game.