Newsletter
Sign Up today for our FREE Newsletter and get the latest articles and news delivered right to your inbox.
Home » 1987 Oldsmobile Cutlass – Underdog 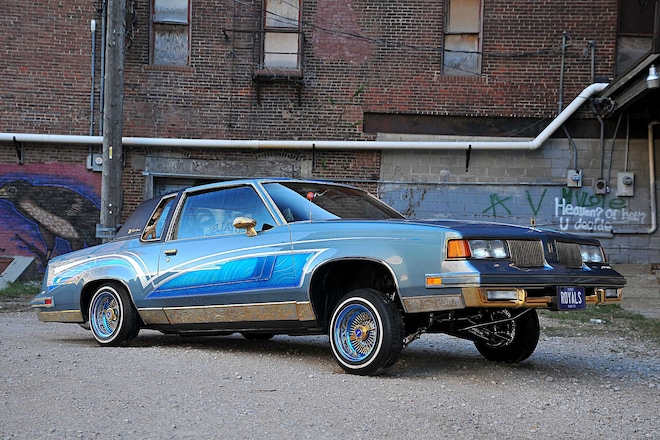 The Underdog is a name often attached to someone or something with very limited chances to come out ahead. John Shatto of Prairie Village, Kansas heard that word his whole life from his teenage years of basketball and bowling right up to his foray into the lowrider culture. “When I first brought a G-body to a lowrider show I heard it all,” John tells LRM, “comments like you’ll never win anything to you’ll never stand out.” John knew that it would take more than just ordinary to make his Oldsmobile stand out.

His very first car was a Buick Regal with a modest hydraulic setup that eventually was traded for another G-body and then another G-body until in 2012 his good friend Aaron Munoz was in possession of an ’87 Oldsmobile Cutlass that was taking up space at his shop. John inquired about the Cutlass and before long he was able to purchase it from his friend. John along with his son Brandon went half in to start a father-son project.

The Cutlass was as new as can be, originally owned by an elderly lady in Iowa with only 40k original miles on it. There was minor rust on the body and the stock paint was fading and cracking in certain areas but everything else was mint. The first step was bringing the Oldsmobile back to a clean starting canvas. John brought the G-body back to Aaron’s shop 1 of a Kind Paint and Body where the trim was stripped off and the body was cured of all the rust. The factory paint was resprayed to the baby blue original color.

The next step was bringing in Los Garage to lay down some patterns and prepared the Cutlass for the House of Kolor paint work and leafing by Aaron Munoz. Once the body was completed, John’s high school buddy Dan Gouger added a two-pump Hijacker setup bringing the G-body to the ground. Corona Chrome and Polish reinforced the frame to protect it from bending. During the next few months, John began gathering chrome parts including arms, steering links, gas tank, driveshaft and rear end. John started taking it to shows but it still wasn’t enough to turn heads.

John decided to enlist The Interior Shop in Kansas City who took over the task of switching the stock cloth interior to updated and upgraded vinyl two-tone seats and panels. Cushion padding was added for a more comfortable ride. A custom console was added with cup holders and a compartment. A Nardi steering wheel was mounted as well as a full stereo system installed by Steve-O at Steve-O’s Custom Car Audio.

John went to the Las Vegas Supershow and realized what his final touch would be. He contacted Krazy Kutting and started sending off almost every inch of gold and chrome on the Oldsmobile inside and outside. “It took almost a year to finally get everything back and installed but it was well worth it,” John adds, “I think it was the final touch.” John joined Royals CC out of Las Vegas when friend Aaron Munoz and Eric Saylor vouched for his motivation. John entered his first show after finally completing his build at the World of Wheels in 2017 and got his first top award bringing Underdog completely to the top of the game.

John wishes to first thank his father Earl for his love of cars. Their bond was strong until the day he passed in 2017. A special thanks go to Aaron Munoz and Eric Saylor for all their help and the immaculate work on the body and paint. John wants to thank his club brothers at Royals for accepting him with open arms and to his wife Amanda for her love and support and to his son Brandon for supporting him with this passion. Underdog was never counted out and proved all the skeptics wrong.