Newsletter
Sign Up today for our FREE Newsletter and get the latest articles and news delivered right to your inbox.
Home » 1987 Chevy Monte Carlo – Bloody Money 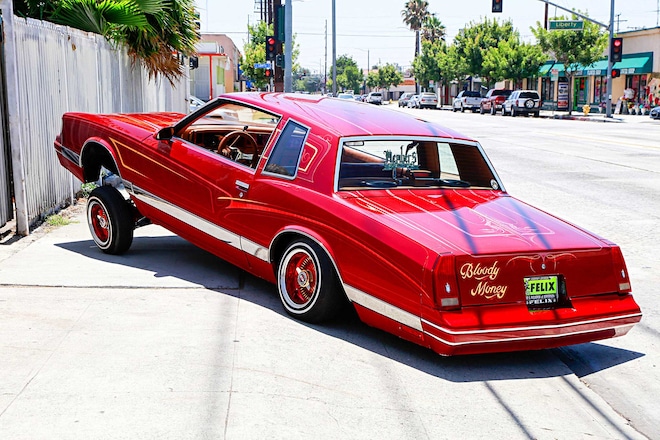 The competitive nature of custom cars brings out the beast in us. It’s what drives us; it’s what feeds our soul. But that friendly competitive spirit isn’t so friendly when it comes time to pay the piper. You see, building a lowrider isn’t a task, it’s more than a hobby, and it’s definitely not a game. To successfully build a lowrider means giving up part of one’s self and sacrificing time away from family. In short, lowriding isn’t for everybody and it has to be in your blood. It requires patience, fortitude, and plenty of hard work to gain the capital necessary to create these masterpieces. But don’t believe me, just ask Juan Vegas, and he’ll tell you all about it.

When asked about what motivated him to build his car he replied, “I wanted to kill the competition”—a strong sentiment that’s appropriate when one considers his lowrider is named “Bloody Money.”

In order to do that Juan had to contract some of the industry’s top car builders, and together they put together a plan of attack. But prior to getting to that point, Juan would have to put in plenty of work. In fact, he began his journey with a lowrider bike—a bike he later traded for a 1982 Regal. From there he bought, repaired, and sold numerous other vehicles until he came across a 1987 Monte Carlo.

Wasting no time, he took the Monte Carlo directly to Pelon’s Pinstriping to lay down one of his signature candy paintjobs. A bright candy red was sprayed with pink pinstriping and gold leafing accents added throughout the vehicle. Tony Coronado was brought in to add murals to the doorjambs, trunk, and dashboard. The guys over at Street Fame Hydraulics installed the custom two-pump setup with matching anodized square dumps. Before the 13×7 Zenith wheels were mounted onto a set of 155/80-13 radial whitewalls, they were anodized to match the paintjob. Last but not least was the semi-custom interior, completed by Eddie of Backyard International. Eddie stitched together a peanut butter vinyl using diamond stitching and added painted dash panels and custom murals.

So as we all continue to build, create, and recreate our lowriders, just remember the struggle because somewhere in some town there’s someone else sharing the same bittersweet pain. This is what built our culture, and this is what will keep us highly appreciative of all who enter the game, because in the end it is our cars and the relationships we build that will ultimately define who we are and what we’ve done. So on that note, work hard, mod slowly, and every time you have to pay a chromer, engraver, builder, or painter, just remember it’s just bloody money so get out there, spend wisely, and build the car—and the life—you’ve always wanted.