Newsletter
Sign Up today for our FREE Newsletter and get the latest articles and news delivered right to your inbox.
Home » Fully Customized 1987 Chevy LS Monte Carlo Lowrider Memorial Build 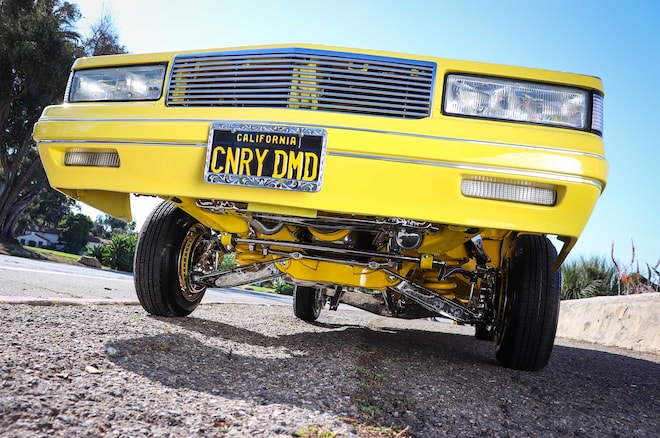 This 1987 Monte Carlo LS is powered by a small-block V8, but it’s purpose-built and driven by a woman who’s out to prove a point. Built to honor her good friend, this lowrider pays tribute to her memory while serving as inspiration to fellow women lowrider enthusiasts.

To get to this point has been a long time coming, and it all started at the age of 5-years old when Claudia Peralta became mesmerized by and she remembers watching her grandfather work on cars. He’d pour his love and soul into each and every one of them, and the most precious memories come from when grandpa would take her out cruising. By 18 years old, she found herself frequenting car shows with her brother Ito, but it was both Danny Trejo and Mito Villapudua that finally motivated her to build a ride of her own.

Her friendship with Mito became something very special. As she began building her car, she built an undeniable bond with Mito’s daughter Jennifer, aka J-Kush. “Jennifer was my partner in crime at car shows and had an immense passion for lowriding and photography.” Now for those in the know, Jennifer’s coverage and her signature “JKush Photography” amassed a large following and she quickly became an internet sensation. Sadly, Jennifer passed away a few years ago at the age of 19 in a tragic accident.

During the anguish, her husband Jovani saw the pain his wife was going through and did what he could to console her. He reminded his wife that Jennifer would have wanted nothing more than to see her finish the car and even suggested finishing off the build and dedicating it to the memory of Miss J-Kush herself. This became the Claudia’s new guiding force and once she found the strength to restart the project, she bounced back and created this Monte Carlo she calls “Canary Diamond” – a term that incorporated Jennifer’s favorite color of yellow, and a symbolic ride that would represent the empowerment of women. And while the build was dedicated to Jennifer, Claudia hopes her car will encourage other woman to lowride and change the landscape of what is a predominantly male lifestyle.

Claudia admits that building a lowrider “takes a village” to get the job done and she’d like to thank WhoBangers Customs, Team J-Kush Familia, Nite Life Car Club and her husband Jovani, and her family for their never-ending encouragement.

Body/Paint
Mike “Chronic” Lopez of Oxnard, California laid down a Corvette yellow with brass gold and gold ice pearl patterns. Spanish gold candy paint was laid out over silver mini flake on the hood, roof, and trunk. Art Garcia of A-Designs in Corona, California carefully did his fine lines of pinstriping, silver leafing and gold leafing, while Juanito “Show Status” of Santa Paula, California did a plethora of airbrushed murals depicting some of the world’s greatest women of our time whom we lost too soon: Selena, Marilyn Monroe, and of course Jennifer “J-Kush” Villapudua.

Suspension
Hydraulic setup was built by Big Al Customs in Bakersfield and installed by Augie Gomez of Lugos Hydraulics in Oxnard. Engraving was done by Patrick Garcia of Sleepy’s Engraving in Bakersfield.

Interior
Santos Upholstery of Bakersfield did up the custom yellow (with pearl yellow inserts) vinyl interior.