Newsletter
Sign Up today for our FREE Newsletter and get the latest articles and news delivered right to your inbox.
Home » 1987 Chevrolet Monte Carlo LS – Game Changing 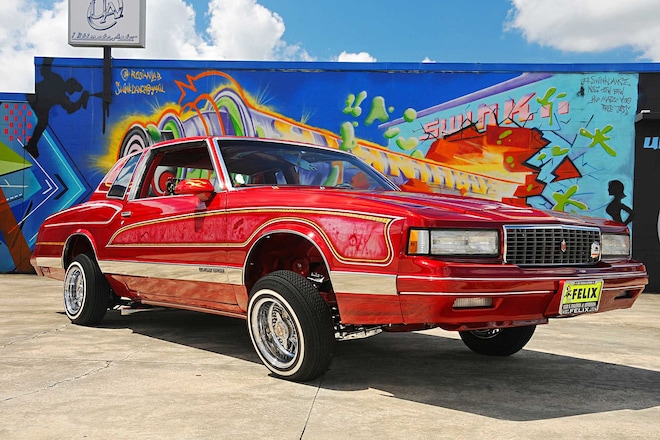 When now Orlando resident Kevin “Smiley” Cordova found himself heading down the wrong path in life, he knew it was time to change. Born and raised in South Central Los Angeles, Smiley’s life was out of control. So after his sister in Orlando offered him a job to work construction it was the jumpstart he needed to spark change and a new life.

His fresh start proved to be the right choice as years later he would cross paths with a girl who would end up becoming not only his wife, but a driving force behind his build. The lowrider culture has been in Smiley’s blood since he was a kid in L.A. but now was the time to make his dreams come to fruition.

He began searching for a perfect canvas to show off his vision and found a stock 1987 Monte Carlo LS from an ad. Originally, Smiley was going to use it as a daily and just put some wheels on it, but his focus quickly changed and became much more expensive.

Smiley brought the stock Monte to Rene at Firme Hydro Werkz where the frame was wrapped and the full hydraulic suspension was added. From there, The G-body was brought to Mr. Chingon at Midnight Customz for a one-off paintjob with custom murals throughout with gold leafing. The next step was the interior, bringing the once-stock Monte Carlo into a full custom cabin, including a fiberglass dash followed by a full custom audio system by Rob’s Custom Audio.

Shout-outs
Smiley wishes to thank God for letting him get this far and, of course, to his beautiful wife, Josie, and their four children for their constant support. A special thanks to Rene and Mr. Chingon for all that they have done to bring LOWCO87 to where it is now. Smiley wants to thank Ruben from High Hitter Hydraulics for always giving him a hand when he needs it and a big shout-out to his Good Times crew for letting him be a part of their close family. Smiley went from a hopeless situation to better himself having one of the baddest Monte Carlos in the state.