Newsletter
Sign Up today for our FREE Newsletter and get the latest articles and news delivered right to your inbox.
Home » 1985 Oldsmobile Cutlass Supreme Brougham – Child’s Play 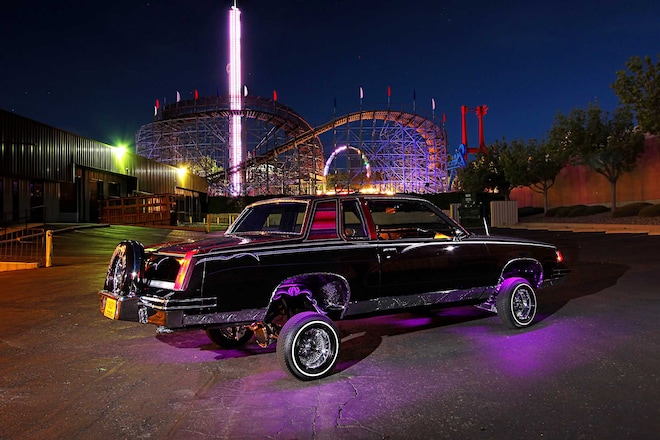 If you transformed a stock 1985 Cutlass Supreme into a magazine-worthy lowrider, would you be content or would it motivate you to do more? It’s a question not too many could answer with confidence. Ask Mike Baca and he won’t give you an answer, he’ll show you the proof, and it’s right here.

After building a Lowrider-featured Cutlass Supreme, featured back in 2014, he saw things that he wanted to do different. But instead of selling the car and starting with a fresh canvas, he tore the show car down to a pile of parts and started fresh. To begin its reincarnation, the first thing he did was have Sean Daly of Straight Street Automotive remove the quarter vinyl top and give the car a nosejob. He even sourced a Euro-spec front end. After the bodywork was complete, Daly shot multiple candy patterns on the entire top of the car, including the rear package tray. Following that, he sprayed the lower half in a House of Kolor black cherry with all the parts being sent to either the chromers or the engraver.

An avid fan of Lowrider magazine, Mike was always a fan of lowriders that carried a theme, so one day while watching the movie Child’s Play, Mike’s wife, Theresa, turned to him and said he looked like Andy (the little boy who owned Chucky) and that’s how the car earned its identity. To bring life to that observation, he had Alonzo Rodriguez (Happy Timez Studio) add some murals of Chucky and his bride to the doorjambs and fuel tank. From there, the perfectly good interior was gutted and in its place a set of custom swivel front seats from Superior Interiors were installed alongside a custom headliner. The rest of the interior was wrapped in a combination of pink, purple, and grape vinyl and suede.

To address the suspension, the trunk was fitted with a set of custom-painted and engraved Mad Hopper pumps with hardlines. Framing the setup is a set of custom panels and a subwoofer enclosure matched to the exterior patterns. Upon completion of the car, Mike even purchased a Chucky doll that he displays with the car, but instead of scaring off the kids it wound up being an attraction that all the kids seemed to love to take pictures by. And while the car is done and being featured once again, it’s got us wondering if version three is on its way or if this is the final chapter for yet another feature-worthy lowrider. I guess only time will tell, but if it happens you’ll see it here first.