Newsletter
Sign Up today for our FREE Newsletter and get the latest articles and news delivered right to your inbox.
Home » 1984 Oldsmobile Cutlass Supreme – Queen of the Boulevard 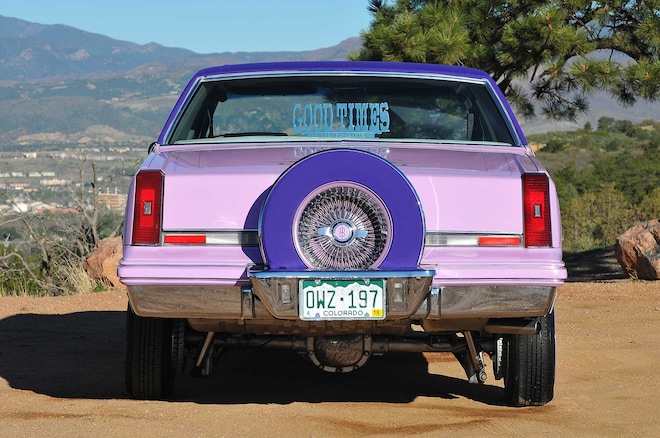 In a male dominated culture, Adrian Delgado-Vasquez sought to stand out. She knew that keeping up with the big boys wasn’t going to be easy, but it’s nothing she couldn’t handle. As a child growing up near Colorado Springs, Colorado, Adrian was surrounded by the lowrider lifestyle and would oftentimes fantasize about having her own custom car. In 1990 she purchased a Chevy S10 in which to get back and forth from high school and within weeks added her own personal touches. The Chevy was lowered and wire wheels were added to give it flare.

After she graduated high school, Adrian got pregnant and decided to sell the truck to get something a little more practical for a family. She took a step back from her passion and focused on her new family. Once she turned twenty-six she began her passion again but this time she wanted to involve her son. She purchased a Buick Regal and then a Monte Carlo because her interest seemed to stay around the G Body frame that was so popular.

At this point she wanted to purchase something that fit her perfectly. With so many of the standard colors and shades that became so common, Adrian was looking for something to stand out and tell her story of female lowriders everywhere. She enlisted her friend Derrick of GoodTimes car club in Colorado to search for a perfect car for her. Within a month, Derrick had found a 1984 Oldsmobile Cutlass Supreme for sale in California. After seeing the pictures of it, Adrian wasn’t quite sold on it until she started doing extensive research.

She spoke with Sandra, the original owner, and verified that the Cutlass was going to a good home in Colorado. Because Derrick vouched for Adrian and she was a member of Good Times, Sandra was assured that Adrian would take care of it and was motivated enough to keep the build moving forward. The car had a bright House of Kolor Lavender paint job that stands out above all, and Adrian added a midnight purple ragtop that made a slight break in the paint. Krazy Kutting engraved the handles to bring out a little more on the Cutlass.

She wishes to thank all of the supportive and helpful people along the way including her loving husband Eddie Vasquez, her son Marcos Delgado-Garcia, Silviano and Stevee Smith, Derrick Curtiss, Sandra Nava, Jesse Russ and the entire Delgado and Escobar family as well as her Good Times family.

It’s not easy for women to be taken seriously in the lowrider culture but with the hard work, dedication and determination, Adrian has successfully earned the respect through her peers with her Oldsmobile. She debuted the Cutlass at the Denver Supershow to a lot of positive attention. She hopes that showing her car at shows will help motivate more women to build and create their own personal identity in this culture. The Queen of the Boulevard will always ride strong.

Vehicle Nickname
Queen of the Boulevard