Newsletter
Sign Up today for our FREE Newsletter and get the latest articles and news delivered right to your inbox.
Home » 1984 Cadillac Coupe De Ville – Jinxed 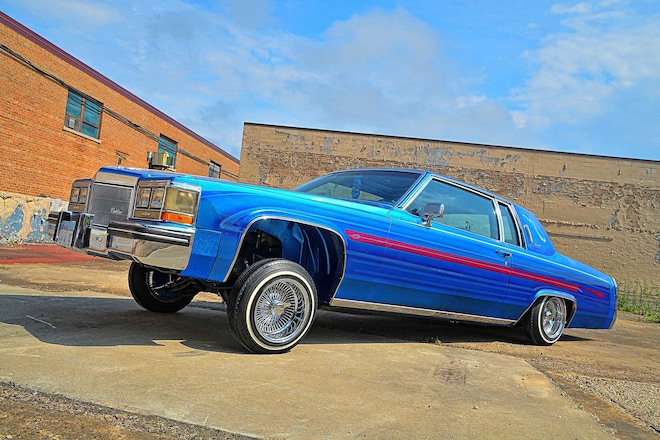 There are people who just randomly always have good luck and then there are people who are perpetually jinxed. For Dino Sabatino of Chicago, Illinois, his father Frank was known as “Jinx” based on his continuous bad luck. As a child Dino remembers his father taking vacations to gamble in Las Vegas and barely having enough money to fly home. His bad luck came quickly and furiously. Of course his bad luck wasn’t limited to gambling. In 2003 Frank was diagnosed with diabetes, eventually his cataracts caused him to go blind, and then in 2010 he was diagnosed with lung cancer.

Dino had grown up admiring his father’s Cadillac collection, “He would get a new Cadillac every three years,” Dino tells LR. “I’d say he had about 10 different ones I can remember.” It was no surprise when Dino was ready to join the custom lowrider scene what his car of choice would be. He found a 1984 Cadillac Coupe De Ville for sale on the south side of Illinois. His father lent him the money to purchase the classic stock coupe so that Dino could start his project.

One of the first things Dino did was change the style by adding a set of Dayton Wire Wheels. One of the quickest ways to alter a purchased vehicle is to change the color, so Dino had John at Payless Auto Body handle the color change by going with a Kia Sparkle Blue. Jerry Chingas was enlisted to handle the custom pinstriping, and Dino flew Sic713 from Houston for all the leafing and patterns on the Caddy. Imaginations club brother Gonzo, who is a master hydraulic installer, began the suspension upgrade, bringing the Coupe De Ville to the ground with a two-pump Hi-Low setup. Another Imaginations member, Hector, added a full 44-inch moonroof to allow the windy city sun in.

Dino found a crashed 1995 Cadillac big-body in a junkyard that had a completely preserved motor. He and club member Lalo swapped it for the stock motor for more power and better performance. The next step was completely reupholstering the cabin to match the interior with vinyl and painted plastic. Once again, Jerry Chingas was called in to pinstripe the door panels, dash, and steering wheel. Dino’s son, Nicholas, who has stereo experience, added a system hidden away to keep the smoothed look.

Dino wishes to thank first and foremost his father Frank for instilling in him the desire and respect for the Cadillac brand, and also his wife, Julie, and kids Michael, Nicholas, Joey, and Alyssa. Special thanks go to all the Imaginations club brothers who were so quick to lend a helping hand in making Jinx a club affair. Dino’s father died in 2013 just before he was able to see the completed Cadillac build that he helped begin, but Dino knows that he’s alongside him in every way. Jinx was named to honor his father and demand respect in the lowrider culture.