Newsletter
Sign Up today for our FREE Newsletter and get the latest articles and news delivered right to your inbox.
Home » 1984 Buick Regal – Unwrapped & Ready to Play 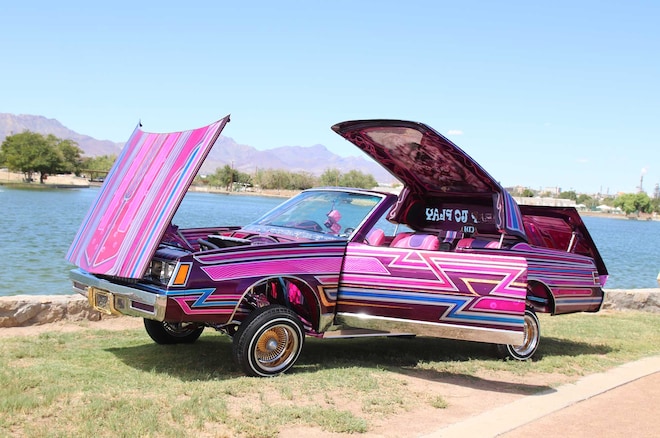 Having grown up around cars, Marco “Kido” Morales dreamed of having his own lowrider. He wanted a dual-purpose car he could cruise and show, and as a Third-generation professional wrestler—who goes by the name Scorpio 2000—Marco also wanted a car that boasted the same level of showmanship he took to the ring. When it finally came time to build the car, Marco encountered negativity, obstacles and setbacks from people putting him down, but he took the high road and focused on his family, himself and building the ride of his dreams.

When asked about the vision of his ride, Marco responded with “I was not going to settle for just a cruiser, I wanted to make a statement and represent El Paso, Texas, just like the big boys.” With his hard work, sweat and sacrifice, he was able to accomplish the build of his dreams and a car that is a literal transformer. One minute, it looks like a Regal with a detailed paintjob and a few minutes later he can make it unfold into a full-blown radical, and that is how he came up with the nickname for the car: Unwrap to Play.

The car debuted this past summer at the Albuquerque Supershow, and among the legendary cars he competed against was Casanova. In the end, Marco was pleased to take home Third Place for Best of Show with a follow-up performance at the Las Vegas Supershow where he placed Third Place for Lowrider of the Year 2019.

With passion and total satisfaction, Marco “Kido” Morales definitely proved a point that when you want something, you have to continue striving until you get it. He silenced all the people who ever doubted him, but he couldn’t have done it without the support of all his family and their understanding of the late hours and time away from them. In addition, he’d like to send a special thanks to his wife, Evett Morales, his children Myokie, Analise, Mark Jr., Markuz, his mother, sisters, brother, and last but not least (his Papiringo) his father, Dagoberto Morales, who passed away last year.