Newsletter
Sign Up today for our FREE Newsletter and get the latest articles and news delivered right to your inbox.
Home » 1983 Cadillac Convertible – Can’t Stop, Won’t Stop 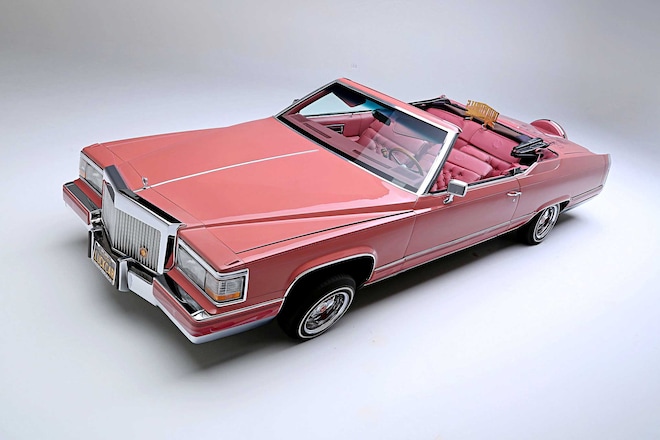 When it rains it pours, but hang around long enough and a ray of sunshine is sure to break and offer you blessings. Just ask Lucky Armas. While getting ready for his father’s funeral on a Friday morning he remembers getting a Facebook message congratulating him on landing the cover of Lowrider magazine. This was back in March 2015. While it may not seem like a big deal for some, for Lucky it was a much-needed sign of hope during one of his most difficult times in his life. You see, lowriding was a way of life passed onto him by his father.

Lucky’s appreciation for lowriding grew even stronger after the fact, and when he sold his 1960 he began looking for a new project. He wanted something a little different, something that would stand out on the boulevard, which ultimately landed him in Las Vegas where he found a 1983 Cadillac project in need of some work. He sealed the deal and had his friend from The Ave (Las Vegas) pick up the car and install the convertible rack and windows. From there, it was fitted with a ’90s kit (aka the Euro Clip) by the HopShop and then bodyworked and doused in coral pearl by Galindo’s Auto Body. Coast One stepped into play and laid down the paint and patterns as well as a trunklid mural that depicted a car wash scene featuring some of Lucky’s previous rides. As if that weren’t enough, he contacted Mike Lamberson to layout pinstriping as well as leafing, and the exterior was polished to perfection.

For the interior revamp, the car was sent back to Las Vegas where Wizards reupholstered the pillow-top interior and convertible top in a colormatched coral. From there on in it was up to Lucky and his club members to put the car back all together—a feat that required plenty of late nights. Fast-forward to the present day and Lucky is now passing the lowrider experience onto his kids just like his dad did to him. These are the experiences that make it all worth the while.