Newsletter
Sign Up today for our FREE Newsletter and get the latest articles and news delivered right to your inbox.
Home » 1979 Ford Thunderbird – Maui Wowie 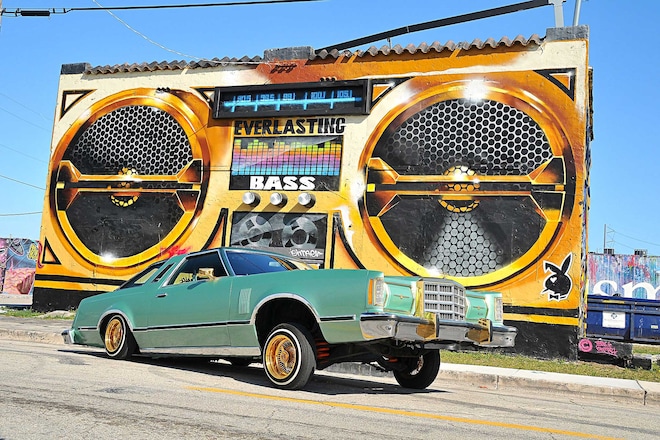 The Ford Thunderbird was in production for a span of 45-years. During that time, the brand ran through eleven different models and even after a five-year hiatus between 1997-2002, the T-bird produced over 4.4 million vehicles. Today, they remain an integral part of American made vehicles and for Andres Bardelas it became a source of inspiration and something he had to have. As an avid customizer, his Andre’s first car graced the pages of LR in 2017 with his ’95 Cadillac he called ‘Purple Kush.’ Following that, he created another magazine worthy vehicle and this time it was a 1963 Impala he called ‘Stoner.’ Of course, the third time is always a charm and now he’s back with this ’79 Ford Thunderbird that he calls, ‘Maui Wowie.’

With a roster of Cadillac’s, Chevy’s and G-bodies already under his belt, Andres was began eyeing a baby Thunderbird. After placing a series of unsuccessful bids on eBay, he spotted a Thunderbird in New York that was in almost showroom condition. In the description, it stated that the car belonged to the original owner but after passing away his family put the car up for sale that had been in storage from 1984 through 2017 so Andres put a bid in for $2,100 and went on about his day. While working on ‘Stoner’ he received an alert on his phone that he had won the auction for $2,050. Immediately he stopped what he was doing and scheduled a transport to bring his new car home. Three weeks later, The Thunderbird arrived in Miami and a quick lookover revealed fading paint, and a few areas of wear and tear which was to be expected from a vehicle that was thirty-nine years old. The very next day, Andres brought the T-bird to Giant Motors in Miami, Florida to be stripped down and the bodywork to be performed.

The stock Light Jade Glow was resprayed, the grille and all the trim were brought to King Auto for gold plating, and after the two-month process of paint and body, Andres brought the Ford back home for assembly. At the time, Andres was recovering from back surgery so he enlisted his Classic Angels brothers to help assemble the ride. Once the trim and lights were all mounted and installed back in the Thunderbird, a set of 13-inch gold and chrome Zenith Wire Wheels with Premium Sportway 5.20’s were bolted up for the classic lowrider look.

The next step was adding a sound system installed by Andres by removing the stock AM/FM radio, replacing it with a Boss head unit and Alpine components throughout the doors and dash. A Memphis Audio 12-inch subwoofer with amplifier was added to the trunk for better sounds. For suspension, Andres is notorious for adding a hydraulic suspension to all his vehicles. He started the setup by installing the old-school two-pump Red’s Hydraulic setup that includes a set of 4-ton springs in the front from High Hitter Hydraulics. His club brothers Gringo and Isaac fabricated a set of 1-inch extended a-arms so the Thunderbird would ride straight without the “butterfly” lean. All fittings in chrome were bought from Ben at Knucklehead Hydraulics in Miami. The power for the pumps comes from six 950cca AC Delco batteries carefully mounted on the sides of the trunk. With the assistance of Jose, Erick, Pincho, Gringo and Isaac, Andres had the entire suspension completed in his garage.

As one of the most influential members in the lowrider community in South Florida, Andres is always building and one-upping his own creative style and flare. He wishes to thank his wife Melissa for continuing to support him throughout every single one of his eight quality lowrider builds. A special thanks to his two sons Andre and Alexander whom one day will inherit the all the rides and passion for customizing like their father has. Andres wants to thank his entire Classic Angels club and friends Jose, Eric, Pincho, Erick, Gringo, Isaac, Sumo and Oney for all their exceptional help.