Newsletter
Sign Up today for our FREE Newsletter and get the latest articles and news delivered right to your inbox.
Home » 1978 Cadillac Paris Coupe DeVille – From Paris With Love 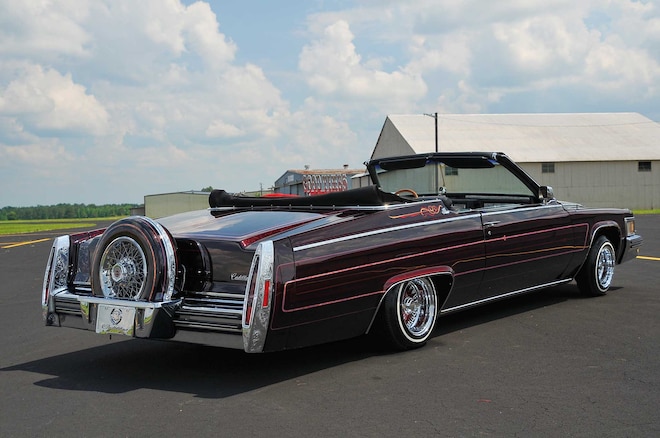 Although technically Cadillac didn’t produce a convertible, in 1978 and 1979, a limited number of Cadillac’s were shipped to American Custom Coach Ltd. in California. The factory hardtop was removed and convertible tops were added and shipped back to the dealerships. Now labeled Cadillac Paris, they were sold at dealerships as factory convertibles. With only about sixty Cadillac Paris editions known to be around, they hold quite a bit of value to those that know what the Paris edition is. As a self-proclaimed Cadillac fanatic, Joel Bouche from Arlington, Texas, knew the value of the rare Paris, and once he found one nearby, he made every attempt to purchase it. The owner wasn’t ready to part with the Cadillac, but Joel persisted until a fair price was reached and got his diamond in the rough.

Joel spotted one nearby and after many failed attempts, it did little to dissuade him. The owner wasn’t ready to part, but Joel kept on it and eventually, he landed his diamond in the rough. The Cadillac easily fired up and drove, but the motor had a knocking noise that couldn’t be ignored, so Joel swapped the factory 429 for a Chevy 350 and had the Caddy brought over to the Leal Brothers for a complete overhaul.

Initially, Joel’s idea was to have a solid Kandy basecoat, but after a few conversations with Freddy, ghost patterns were added to the black cherry basecoat. Lokey then made a six-hour drive from Dallas, Texas, to add some custom gold leafing throughout the body, and once the exterior was straightened and painted, the interior got some attention. Most of the custom Cadillacs have the same old boring pillowtop seats, so Joel wanted something more unique and special to him. Black leather seats with red stitching replaced the stock seats. The Leal Brothers added custom door panels and airbrushed his favorite Lowrider models, Georjah Jaymes and Angel Blue. Krazy Kutting added all his engraving to the interior pieces to stand out even more. The convertible top was replaced due to aging and red stitching was added for accent along with a “gangster” back window.

Once the Cadillac was delivered back to Joel, he added all the exterior chrome parts that were sent out for engraving, the trim, bumpers and side moldings. The next step was adding a full hydraulic suspension setup so Joel enlisted Primo and the crew at Auto Connection. A four-pump Hoppos setup was added making sure that Joel could hit all four corners from the switch plate on the dash. Underneath the Paris, they installed chrome pieces for that shine when the Caddy is locked up.

With more than fifteen different Cadillac builds under his belt, Joel values the elusive and rare Paris as his favorite one to date. He wishes to thank his beautiful wife, Veronica, for all her support and their three kids Sidney, Britney and Journey for all their motivation. As the only man in a house full of women, Joel had the task of being an attentive and devoted father and husband, so his Paris build needed to be completed quickly. From Paris with Love was an example to all his friends and Good Times club members showing how passion can create something unique and exceptional.