Newsletter
Sign Up today for our FREE Newsletter and get the latest articles and news delivered right to your inbox.
Home » 1977 Cadillac Coupe DeVille – El Caddylon 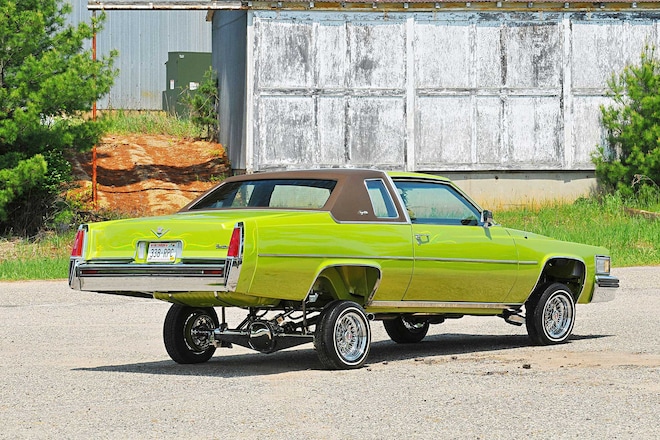 At twelve years old, Rogelio Zermeno first held an issue of Lowrider magazine that his father gave him. The lowrider culture ran through his father’s veins throughout his life, so it was only a matter of time before a young Rogelio would be influenced by it. Born and raised in Mexico, Rogelio first arrived in the United States at eighteen when he and his parents came to visit family in California. That visit led to a permanent residence, and when a job opened up in Milwaukee, Wisconsin, Rogelio moved for a better opportunity.

A late bloomer into the automotive scene, it wasn’t until he was twenty-three that he put his passion into physical form by purchasing a ’64 Cadillac. Although it wasn’t show quality, Rogelio decided to add wire wheels and had it painted to stand out. For the next eight years he grew to love the Cadillac brand until he found a newer Cadillac Fleetwood and replaced the classic with a newer model. Rogelio found himself missing the classic Cadillac so he began the search for another older model Caddy.

His friend Mario Reyes was able to find a 1977 Cadillac Coupe DeVille that was originally out of Florida but had been in Wisconsin Rapids. Most of the vehicles in Wisconsin were filled with rust due to the snowy weather, but this one was completely rust-free. Mario made the pick-up, but unfortunately, on the four-hour drive home, the stock motor blew. Rogelio contacted the seller and they were able to get a replacement motor installed for the time being.

Once Rogelio was able to get his finances together, he started the complete rebuild of the Cadillac. He turned to the Reyes Brothers, in Milwaukee, Wisconsin, for the complete build. Instead of worrying about replacing parts on the older motor, he was able to find a V-8 Vortec out of a crashed Tahoe. Reyes Customs did the engine install that updated the Cadillac to the modern era, including tons of chrome and motor dress-up. Bardo Reyes stripped the car down and completed all the bodywork, preparing it for Mauricio Reyes to lay down the PPG Orchid paint. Mark was brought in from Chicago to lay down all the pinstripe work.

The next step was reinforcing the frame and preparing it for suspension work. Initially, Rogelio was going to turn the Caddy into a hopper, so he added the piston pump with an Adex dump, but he switched gears and turned the setup into a more reliable and traditional Black Magic three-pump setup. Gerardo Reyes was enlisted to handle the interior work, converting the stock seats to a mixture of leather and gator. A Chevy lightbar was mounted under the glove compartment to bring the classic look to the Cadillac. The woodgrain trim was replaced and updated to a higher quality material by Pedro at Team Gilleto.

Rogelio and the Reyes family completed the Cadillac build with teamwork. He takes pride in his vehicles and only trusted the best to help him bring his vision to life. From a man who has only owned Cadillacs, Rogelio plays favorite to this one. He wishes to thank his club SomosunO for all their help and support as well as the Reyes Brothers, Bardo, Gerardo and Mauricio for opening their shop doors and allowing this masterpiece to be completed.