Newsletter
Sign Up today for our FREE Newsletter and get the latest articles and news delivered right to your inbox.
Home » 1975 Oldsmobile Cutlass – East Coast Cutlass 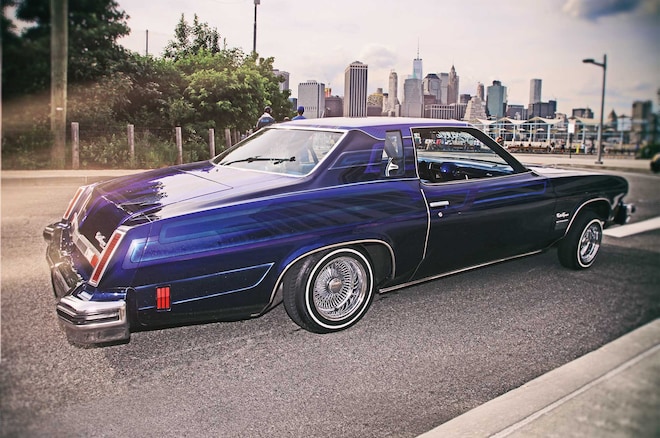 Sergio Muniz’s interest in custom cars began as a teen in New York. His father, who was a fabricator, was a big influence. Sergio became one of the original members of the most well-known and respected car clubs from the East Coast, Drastic Auto Club.

Sergio ended up moving to Pennsylvania to raise his family and create a home. “I took six years off from the lowrider scene to take care of my family. In that time, my kids saw old photos of my cars and trophies I had around the house. That gave me the urge to build another one,” Sergio says. “My wife, Manuela, and I were dating back when I was originally in the club and she supported me if I wanted to get back into it. Her support was all I needed to get back into it.”

Sergio had always been into Oldsmobiles when he came across this one. “I liked it because it was something different. The kid who had it was looking for a sports bike and we ended up trading straight across for one I had.”

The car was in fair condition with typical rust and big rims. Sergio began by prepping the body of the car and then spraying it with a PPG candy cobalt blue. He then sent it out to have fellow club member Marvin Shivnarian lay out some patterns. Sergio then extended the upper A-arms 1 inch and installed two Pro Hopper pumps, three dumps, and six batteries. His interior was sent out to Rudy in Philadelphia to install the blue tweed, suede, and vinyl interior. Unfortunately Rudy died shortly after finishing this interior. Sergio was able to complete the build in seven months and debuted it at the Drastic’s annual barbecue.