Newsletter
Sign Up today for our FREE Newsletter and get the latest articles and news delivered right to your inbox.
Home » 1973 Chevrolet Chevelle Malibu – Innovator 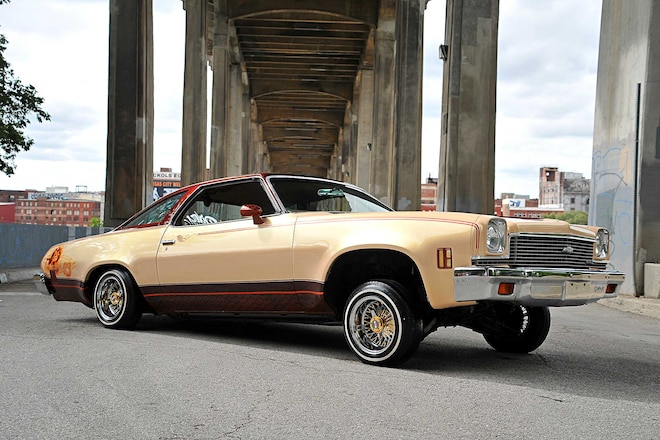 The music genre that started in the ’60s with a mixture of R&B, soul, and jazz is known as funk. James Brown is often credited with the development of funk; musicians like George Clinton, Curtis Mayfield, and guitar legend Jimi Hendrix are considered pioneers and innovators of the funk era. Another funk musician is Danny “Sonny” Cox, with nine albums dating back to the mid ’60s, who is a successful artist living in the Kansas City, Kansas, area. His son, Nathaniel, grew up as one of 11 kids but none prouder and more admiring of his father.

Nathaniel had a different path than his musically inclined father but creativity was certainly in his genes. “I was about 12 years old when I saw my first lowrider,” Nathaniel tells LR. “It was three-wheeling around a corner and I was just mesmerized.” The very next week Nathaniel found himself in the grocery store aisle reading a Lowrider magazine. At 16 he purchased his first car, a Cadillac that he earned from cutting yards and working fast food jobs. He cut the coils and got some wheels but he couldn’t replicate the style he envisioned as a child. When he entered the Job Corp he had to sell the Caddy but his desires grew even stronger years later.

In 2013, Nathaniel came across a 1973 Chevy Chevelle Malibu online that was sitting in a backyard. “I knew the car was super rare,” Nathaniel adds, “but it didn’t run and had two years’ worth of newspapers stacked inside the car.” Over the next two years, Nathaniel worked tirelessly with his mechanic James Burton from Burton Automotive to virtually add and rebuild everything underhood to get it running. The next step was reworking all the dents and dings throughout the body. Richard Soiler in Topeka, Kansas, took the car down to metal and replaced all the panels and bumpers.

With pride, Nathaniel entered the Malibu at a local World of Wheels show and met Lowrider magazine editor Joe Ray. With a lifelong goal of appearing in the magazine, he inquired what it would take. Joe mentioned how the suspension, interior, and some minor other alterations would bring the Chevelle up to that level of consideration. It was back to the drawing board for Nathaniel to meet guidelines for the next year. Jesse Dan Masoner Jr. and the Griffin brothers teamed up to customize the cabin of the Chevy. Aaron Munoz laid down new paint, including pearl and Kandy colors. Jacob Birdsong with Slickairbrush added funk-themed murals to each side, showing Sonny front and center in the paint next to Jimi Hendrix and Curtis Mayfield. When it was time to alter the suspension, Nathaniel consulted with his wife, Shaunte. “She told me, don’t go cheap, so I knew it was time to do it right,” Nathaniel adds. His wife helped the process by purchasing the Hoppo’s setup for their fifth wedding anniversary.

Nathaniel wishes to thank first and foremost his loving and supportive wife Shaunte and his father Sonny for the inspiration. A special thanks go to the Griffin brothers, My Cox, Snoderly, Johnson, Gandera family, Diverse Ones club brothers, Real Riders club, and all the family and friends in the lowrider community. With the added push from Joe Ray, FunkVelle 73 was able to elevate further than he had dreamed he could.

Body/Paint
Front and rear bumpers tucked 4 inches; 1977 side mirrors; Matrix tan, brown, and orange pearl with flake over silver base by Robert Soiler; Kandy, pearl, and pinstripe by Aaron Munoz at 1 of a Kind Paint and Body; murals by Slickairbrush; HID headlamps