Newsletter
Sign Up today for our FREE Newsletter and get the latest articles and news delivered right to your inbox.
Home » 1973 Chevrolet Caprice – Family Tradition 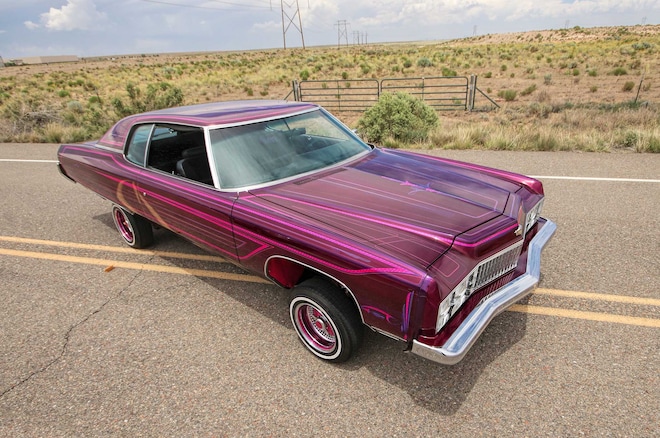 Back in 1972, Frank Lopez’s dad, Frank Sr., walked into the Chevy dealership and special ordered his first new car-a White 1973 Caprice Classic. Before the car was even delivered, his dad started buying accessories starting with a set of Cragar wheels he ordered from a catalog.

Frank always loved cruising with his pops and seeing people’s reactions to the car, and this motivated him to start working on his Euro, but his father had plans of his own. Before Frank Jr. went off to serve his country, his dad handed him the keys to his beloved ’73 Caprice Classic and Frank Jr. wasted no time in making it his own.

In between different tours, he worked on the car with whatever spare time he had and managed to shave the firewall, bumpers, door handles, and a lot more with the help of his father. By 2001, Sal Manzano painted the car a candy violet with patterns and fades and spent the following years racking up a mod list which includes a shortened and reinforced rear end, custom front A-arms and plenty of chrome prior to installing a Hoppo’s two-pump setup with four batteries. The interior was redone by House of Covers in a black vinyl and suede combo.

Fourteen years later, the original clearcoat started showing signs of age, so Frank had Curly’s Pinstriping update the paint by adding more patterns, pearl graphics, pinstriping, and leafing before clearcoating the entire car. Shinji also added murals of his son and daughter to the doorjambs. The car is always an ongoing project, and one day he hopes to hand it down to his son.