Newsletter
Sign Up today for our FREE Newsletter and get the latest articles and news delivered right to your inbox.
Home » 1972 Ford Thunderbird – Old School Tangerine 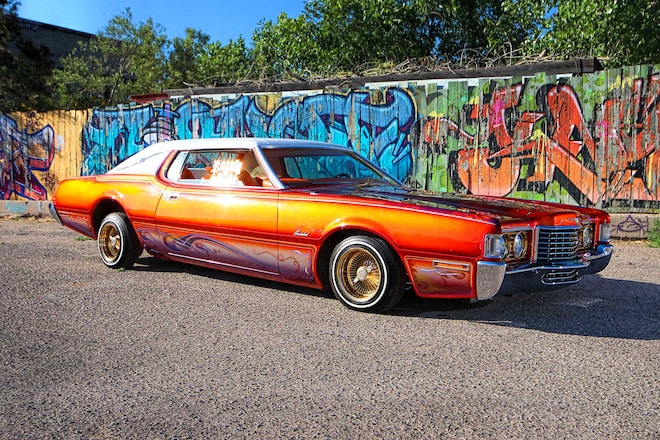 The 1972 Ford Thunderbird was the largest car Ford ever produced weighing in at 5000lbs. It was touted by ford as a personal luxury car. When Chris Quintana purchased the car you see here it was a lot rougher. He bought it as a parts car for another project he was working on. The car was being used by a local airport to pull gliders into the air. $400. Dollars seemed even a little high. The car was loaded up and headed home where it was supposed to be parted out. The car sat for some time until Chris decided it would be his next project. Chris a Mechanic by trade pulled the drive train and sent it over to Ernest and Sons for a rebuild. While the motor was out he cleaned up the engine bay knowing he wanted a car to hit up the shows with. With the car running right his focus moved on to cosmetics. The orange you see here was not the first color to go down it was originally root beer brown. But a mishap with a neighbors dogs meant time for a color change. This time around he wanted something a little more flashy. Klines Kustom color started with A silver base, with fades and some ghost graphics before applying the Kandy Tangerine. Then some subtle patterns were added before Ray Sauzo muraled the hood, trunk and door jambs. After the clear was dry Geet added some pinstriping throughout the car. Hydros was next, they were installed by none other than Eppie Martinez. The rear end and A-arms were molded and sent out with all the rest of the stuff to get re-chromed. The custom two tone interior was stitched up by Angels Upholstery in Alamosa. Not long after the cars completion they were heading home with the car on the trailer when they saw the car’s interior on fire, something had caught fire inside. Luckily they pulled over quickly and extinguished the fire. The interior was a total loss and Chris was a little saddened that his hard work was damaged. The car sat in the garage for some time before Chris got up enough courage to start repairing the car. Luckily the only damage was the interior and the vinyl top. The paint was left untouched. After quite a bit of clean up work the car was back on the road.