Newsletter
Sign Up today for our FREE Newsletter and get the latest articles and news delivered right to your inbox.
Home » 1972 Chevrolet Monte Carlo – Plain Jane 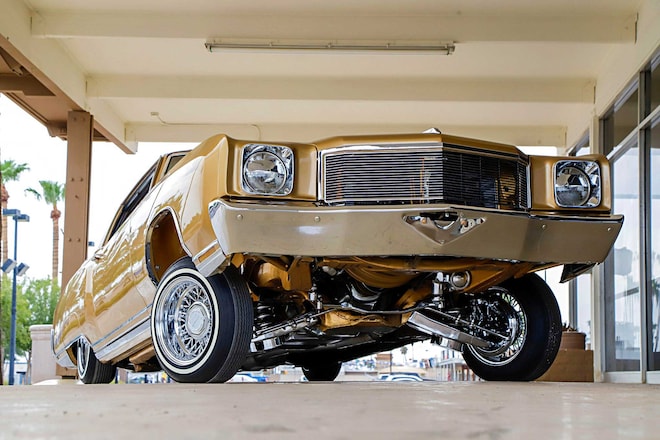 During the ’80s, Dino Acosta found himself a regular passenger in the backseat of his brother’s cars. It was there he found an exclusive place to sit, a place to watch the magic unfold. It was also his informal introduction to the world of lowriding. Since then, Dino has watched lowriders go through phases and trends. Some have lasted, others have faded to the abyss, but for Dino, his childhood memories are all too attached and familiar with the lowrider styling of the ’70s and ’80s.

So when it came time for Dino to build a lowrider of his own he already knew the direction he’d take, but first he’d have to get a project car to start with. Like many of us, he started with a “sometimes running and slightly beat up” bargain that he picked up for $2,200. The 1972 Monte Carlo had previously served as a daily driver but it was about to be treated to a revamp and full-body rejuvenation.

They started by shaving the hood, the firewall, as well as the trunklid. Once void of all blemishes and minor repairs, the body was doused in a PPG Sandstone Brown complete with pearl and microflake. Inside, the interior retains a stock look while a complete Pioneer audio system brings the sounds up to modern-day standards.

Aside from a stock frame, everything he could possibly unbolt would eventually be painted or chrome plated. Pop the trunk and you’ll find a raw and unadulterated hydraulic setup created by Dino, along with the help of fellow car club members and a few 18-packs. Void of cover panels—which have become the norm by today’s standards—his trunk pays homage to the styling cues of the ’70s in a fashion that’s not only period correct but a throwback that brings back plenty of memories.

Connecting this time machine to the streets is a set of 14×7 True Classics wrapped in Premium Sportway whitewall 5.20s. To put power back to the wheels, the small-block 350 was brought back to life with multiple Edelbrock upgrades, plenty of chrome and billet accents. Much like his trunk setup, his engine bay is minimal but the results are nothing short of mesmerizing and a definite throwback down memory lane.

Now that Dino has gone from spectator to player, he has no plans to stop driving this car every chance he gets. His Monte Carlo has become a regular sight at local cruise spots and car shows and he’s even been known to hop it just to show that it’s got more than just good looks. In all, it’s a throwback in time and a tribute not only to lowriding but to the forefathers who helped create the foundation that we ride on today.

Engine
Chevy 350 with Edelbrock upgrades and chrome and billet accents