Newsletter
Sign Up today for our FREE Newsletter and get the latest articles and news delivered right to your inbox.
Home » 1971 Chevrolet Monte Carlo – A Blessing in Disguise 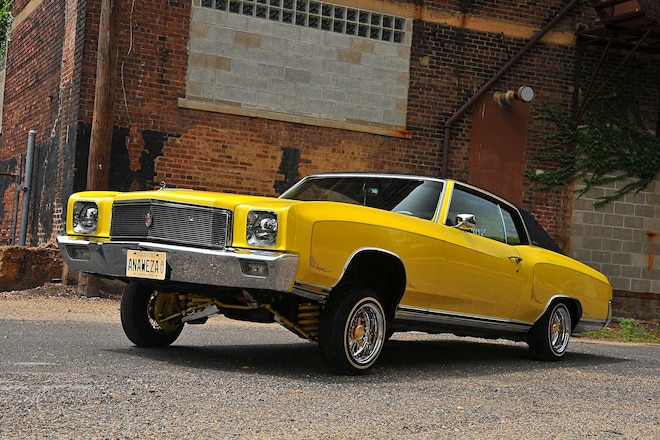 Anaweza is the African word for “God is able” and for Joshua Etchinson, it took an act of God to finally get him to his perfect life. Like many kids, Joshua didn’t grow up wealthy or even comfortable. His family had to work hard to make ends meet, and as a child, Joshua spent most of the time at the supermarket flipping through magazines while his mother shopped for food.

But on one particular day, Joshua came across a Lowrider magazine and it was game over. “It was like something inside me got very excited seeing the cars, and I knew that this would be my future,” Joshua tells LRM.

Once he got old enough to work, he started painting houses and began saving enough money to help pay for college. He enrolled and started attending Jackson State University in Mississippi, and that’s where his entire life changed. He met his now-wife, Martha, in his math class and spent over a year chasing her but couldn’t get her attention until one day she agreed to have lunch with him.

Shortly after picking it up, he enlisted 309 Restyling to coat the new classic in bright yellow. The hydraulic suspension was added by Joshua himself and became his first hydraulic vehicle. The next step was the interior, making the classic look updated.

Joshua wishes to thank God first and foremost for blessing him by bringing him together with his beautiful wife and for their children. He wants to give a special thanks to his club StreetStyle worldwide for their constant support, including Terrance, Reese, Dre, Mo, Des, and Kow for always being there to help. God was able to make Anaweza a dream come true for Joshua and Martha.