Newsletter
Sign Up today for our FREE Newsletter and get the latest articles and news delivered right to your inbox.
Home » 1970 Chevrolet Impala – The Family Affair 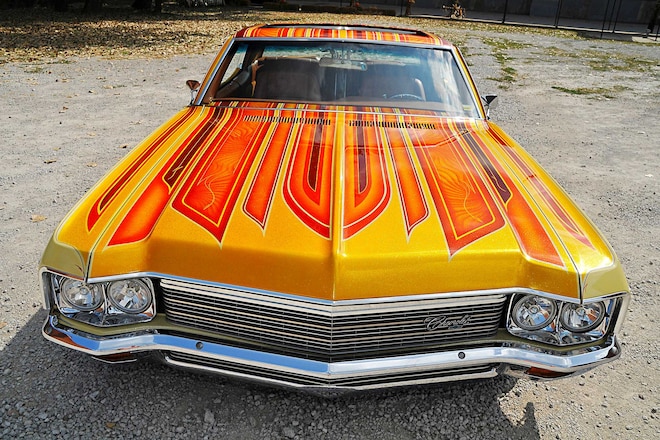 When 45-year-old Dwight Brooks looks back on his life he wonders how he made it to where he is today. Growing up in the Central Westside of Kansas City, raised by his single father, Lawrence, Dwight didn’t always follow the right path.

The youngest of four, Dwight was searching for a way to fit in. At 13, he joined a gang and continued on the wrong path. He got involved in the lowrider culture because of his best friend Chad Waldrop who owned a hydraulic truck. He noticed that the attention they received inside the custom truck was something that he enjoyed, so at 16 he purchased his first car, a Buick Regal.

He spent the next four years customizing his G-body until that gang-inspired lifestyle caught up with him and he was sent to jail for two years and his lowrider was confiscated. During that two-year stretch, Dwight had nothing but time to reflect on his decisions and decided to turn his life around. After being released with literally nothing to his name, he began building up his life positively. He met and fell in love with his now wife Amanda who gave him the ultimatum that if he ever went back to his old life, she would leave him.

Shortly after Dwight and Amanda were married they started a successful roofing company in the Kansas City area. The only thing missing was bringing that love back to his life in the form of the lowrider culture. He searched for a vehicle that both spoke of his struggle and turned heads. His friend mentioned that he had a 1970 Chevy Impala that wasn’t finished and he was hurting for money. Dwight offered a fair amount and took possession of the Chevy.

The Impala was in decent shape but didn’t have that “wow factor” that Dwight yearned for. Almost immediately he contacted paint guru Fabian Villarreal from Corpus Christi, Texas, and flew him in to add a showstopping paintjob inside his best friend Chad’s shop. Once the paint was completed, Chad and his crew at King Kandy upgraded the hydraulic system to accommodate larger cylinders, adding new batteries to replace the old marine batteries. One-inch hardlines were installed for a cleaner look.

Now that the Chevy was starting to show promise, Dwight knew the interior needed attention. Chad started from blocks of foam and carved them down to working bucket seats, replacing the stock ones. A custom center console was built down the center and speakers added for sound. Two-tone suede and leather was used to wrap the seats, panels, and dashboard. A full stereo system was installed and hidden for a cleaner look. A trunk cover was added, along with a motorized trunklid that can be opened by a button. A 44-inch electric sunroof was added to round out the body modifications.

Dwight’s second chapter of his life has gone without chaos. Although he was too young to really understand what trouble he was getting in, it took that trouble to for him to arrive as the successful, married businessman he is today.

He wishes to thank his beautiful wife, Amanda, their three children, Audrey, Landon, and Cameron for showing him how to love and live again. A special thanks goes to his best friend Chad Waldrop, owner of King Kandy. He wishes to thank Fabian at Kandy Kustomz for the amazing paintjob that exceeded all expectations, and wants to recognize and thank Jamie Shelly, his favorite and best lowrider fabricator; may he rest in peace.