Newsletter
Sign Up today for our FREE Newsletter and get the latest articles and news delivered right to your inbox.
Home » 1969 Chevrolet Camaro – Sexy Nine 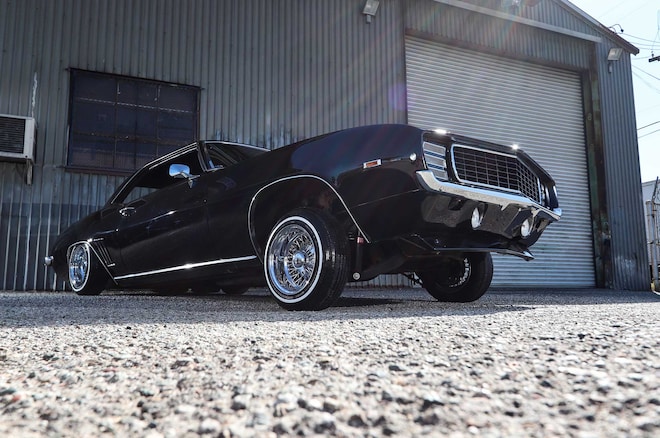 Throughout childhood, Miguel Flores heard many stories from his father about cruising the infamous Whittier Boulevard in East L.A., so there was no wonder why his love for cars grew from a very young age. In 2005, for his 21st birthday, he received the best birthday present a car enthusiast like Miguel could ever get: his dream car, a 1969 Chevrolet Camaro! The car itself was a good start, but it needed a significant amount of work. Making the dream a reality would ultimately take years to complete. Miguel knew from the beginning though that he wanted his Camaro to be as fast and as low as possible.

As the years passed, Miguel ended up being blessed with having two sons. His boys always came first, so the car often was put on the back burner in order to focus on his sons whom he loved so much. But it wasn’t just his boys whom took priority over that Camaro. Miguel seemed to always put his things aside to help friends or family members in need. He even was able to help his father build a 1950 Chevrolet Deluxe two-door hardtop before he passed away in 2012. That ride went on to be featured in Lowrider Magazine.

It was shortly after his father’s passing that Miguel knew he wanted to finish that dream car of his and he knew exactly how he wanted to do it. He knew he wanted to make a statement by being different—so he made the choice to finish his Camaro in what most people would consider to be sacreligious: build a lowriding ’69 Camaro! No, not a hot rod or even a “low rod”… He wanted to give it the traditional lowrider style with a slammed stance, rolling on 13-inch chrome spoke rims and whitewall tires!

Unfortunately, Miguel recently passed away on August 15, 2018 from complications of diabetes, but not before accomplishing so many things, like seeing his boys grow up into young men, helping his family in so many ways, helping his jefito finish his car, and to topping it all off, Miguel was able to see his dream come true: complete a one-of-a-kind lowriding 1969 Camaro known as the “Sexy Nine”!

Miguel is survived by his two sons Marco and Andrew, mother Maria, little sister Krystal, comadre Terrie, godson / nephew Jacob, the Unidos Car Club brothers (which include Miguel’s brother-in-law Enrique and Miguel’s brother Eddie). The family thanks those who were involved with the build of Miguel’s Camaro, the friends and family who supported Miguel spiritually and physically over his 35 years on Earth. Last but not least, they also thank Sam over at PartsBarn.com for his help with this Camaro’s feature.

Eddie knows that his brother Miguel is in a better place but there isn’t a day that goes by that he doesn’t wish he could just take one more cruise with his best friend, his carnalito. “I love you, carnal. It’s you and me all the way, no matter what! Ride in paradise, little brother.”

Engine
The 350-cubic-inch engine was pulled and bored out, and a mild cam was installed by Manny over at California Classic in the city of Paramount, California. The transmission was also given some love to make sure the power was able to get on the pavement.

Body/Paint
The paint was finally finished in black with a couple of coats of clear by Luis at Rodriguez Paint & Body in the city of La Puente, California. Some subtle touches were done including shaved badges and removal of the wipers. The RS grill was added and hideaway headlights were installed. Of course the Camaro spoiler on the trunk was a must.

Suspension
It would be hard to call it a lowrider with it being so high at stock height, so the car was taken to Aaron Iha over at Chassis in the city of Covina, California. A custom-made air suspension kit with a 4-link setup allows Sexy-Nine to lay all the way down to the floor.

Interior
The interior was pulled and redone in the original pattern but with suede and leather coming together to make the car have a little touch of luxury-custom. Compliments of Lopez Upholstery in Pomona, California.