Newsletter
Sign Up today for our FREE Newsletter and get the latest articles and news delivered right to your inbox.
Home » 1969 Buick Riviera – A Promise Kept 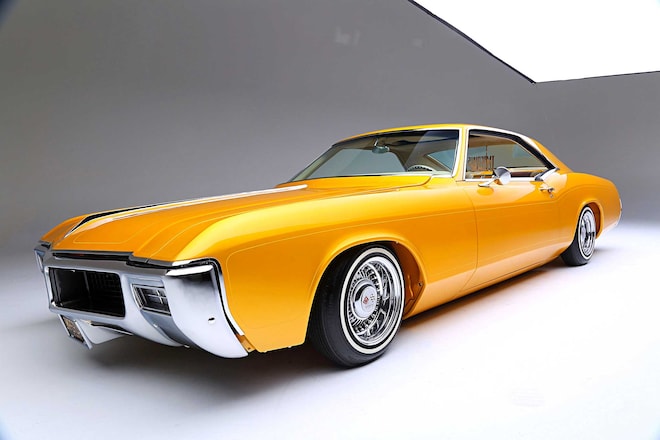 Mario Zamudio was one of the OGs in the Imperials. As a member of the Los Angeles chapter from 1982-1992, he was best known for his custom 1970 Monte Carlo nicknamed “Evil Ways.” “That was the original ‘Evil Ways,'” Mario says. But as he speaks about his time in lowriding, the one thing he’ll never forget was the promise he made to the late Jesse Valadez about one day rejoining the club.

To bring that promise to life, Mario would have to start on another project, so he set out on a search for his next platform. With a specific car in mind, he periodically browsed the ‘Net until one day his friend Albert Martinez, told him about a Riviera for sale in Hesperia, California. The Riviera wasn’t on his list of cars he was interested in but nonetheless he took a look. It turns out the son of the original owner was selling it. At one point the son had tried restoring it himself as a tribute to his father, but from the car’s current condition it became quite clear he wasn’t too mechanically inclined. “The car was in a thousand pieces” Mario says, and adds, “The more I looked at it, the more it grew on me, so I worked out a deal for $500.”

Upon receiving the car, the first thing Mario did was take inventory of all the parts to see what he was missing. Mario says, “Unlike an Impala, you can’t just open up a catalog and order parts for a Riviera. You have to hunt them down, work with what you got, or make parts work from other GM models.” With the car fully disassembled, the list may not have been long but the parts were definitely hard to come by as just the body mounts took him one year to locate.

To help offset the cost of his project, Mario began working every Saturday for Nick Santana (the painter) in exchange for a paintjob. When the process began, Nick wanted the paintjob to encapsulate the entire body so he painted every crevice, including the underbelly of the body. From there, the entire build was gone through, including the rebuild of the motor, transmission, suspension, and axles.

In all, it took an entire four years to get the job done, at which point he was able to fulfill his promise to Valadez as he not only rejoined the Imperials but currently sits as the VP of the club. But building this car was not only part of a promise, it was an eye-opening experience that made him understand why Riviera builds are scarce to come by. As he found out, looking for parts was a lot more difficult than he had thought, but worth every spare moment it took from him.

Now that the car is complete, Mario sits back at car shows and enjoys talking to people about cars and the culture. He adds, “No trophy can come close to having people compliment and take photos of my car, but I feel even better that I had a hand in the build from start to finish.”

Body/Paint
Body side moldings and markers were removed and a moonroof was installed; PPG pagan gold candy