Newsletter
Sign Up today for our FREE Newsletter and get the latest articles and news delivered right to your inbox.
Home » How to Convert a Fastback into a 1968 Chevrolet Impala ‘Vert 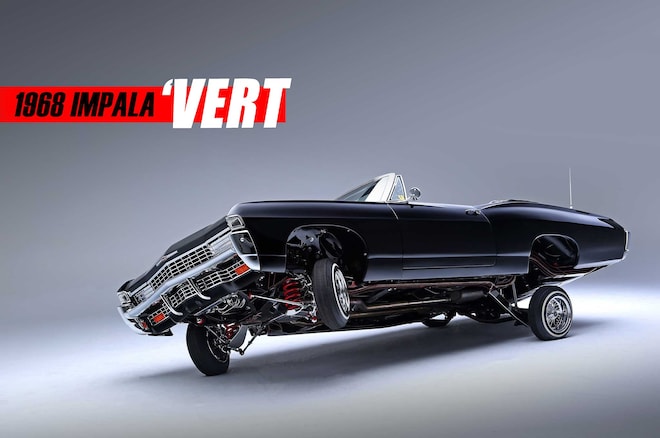 As beautiful as they are, ’63 and ’64 Impalas have become somewhat of the norm in the lowriding arena, especially compared to the 1968 Chevrolet Impala Fastback. The younger, much more popular versions litter the net, dominate the shows and while they remain incredible platforms, it’s nice to see something different every once in a while. So, when a clean ass ’68 like this pulls up, it’s not only refreshing but definitely something to take note of and this one is a prime example.

Owned by Novan Fontaine, his obsession with lowriders started as a teen when his friend introduced him to Lowrider Magazine. Years later, Novan himself became a regular reader, and soon found himself in a black 1967 Impala sedan. It didn’t take him long to realize this was not the correct platform, so he upgraded to a ’68 Impala fastback. “I wanted it to three-wheel, so I decided to do a frame-off,” says Novan.

With the vehicle disassembled, he wrapped the frame, swapped out the differential and even converted to a disc brake setup all around. Since the process took longer than expected, the body had sat around fully exposed to the East Coast elements and suffered excessive rust. Since he had invested so much into the rolling chassis, Novan wasn’t about to quit so he set out in search of a donor car with a cleaner body and that’s when he stumbled across a ’68 convertible in the Bronx.

Upon finding it, he went to the Big Apple to bring it back to Montreal, and once home, he stripped it down to bare metal. With all repairs blocked and sanded to perfection, Novan sprayed the underbelly, doorjambs, hood, trunk and interior and when it came down to painting the body, he sought the help of Julien Quintal.

Next, he moved on to the engine compartment where he replaced everything and brought it up to show quality status. Along the way, he received hideaway and front corner running lights, and the final steps were to update the interior, install a hydraulic setup and redo all the chrome. In all, the entire build took him eight long years to complete and it’s something that wouldn’t have been possible without the help, support and motivation from his wife Roxanne, his friends, family and he’d like to send out a special thanks and recognition to his now deceased father-in-law for the incredible moments and inspiration.