Newsletter
Sign Up today for our FREE Newsletter and get the latest articles and news delivered right to your inbox.
Home » 1968 Chevrolet Impala Coupe – Turning Lemons Into Lemonade 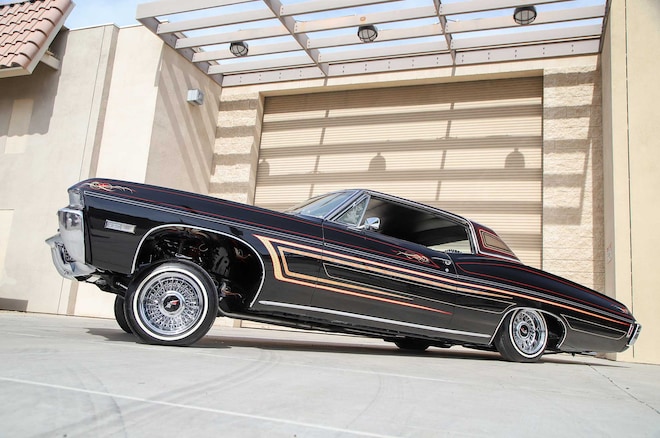 By the time most young men can slide into the driver’s seat of a car, they’ve probably already got a dream car in mind, but in the case of Rick Ruiz, his dream car literally pulled up in a parking lot when a co-worker showed up in a ’68 Chevrolet Impala coupe. It was love at first sight, and the emotional connection he had with the car almost immediately had him making him offers and a few minutes later he became the proud new owner of the Impala.

Thrilled about his new car, Rick enjoyed driving the Impala around Tempe, Arizona, and six months later a freak accident left his beloved Impala crashed into a pole. Not one to be overcome with negativity, Rick saw this as an opportunity to rebuild the Impala and that’s when he went back to the drawing board.

Rick drew much of his inspiration for this rebuild from the childhood memories he forged with his father. Rick recalls the times spent cruising the streets of South Phoenix with his father, and he vividly remembers his father’s passion for collecting and building lowriders. In honor of that, Rick wanted to continue the family tradition and the following three years were spent reimagining the wrecked Impala.

The lowrider, appropriately dubbed “El Comandante,” features a powerful 350 engine with an Edelbrock intake and carb mated to a turbo 400 transmission. Black Magic Hydraulics provide the necessary bounce and the exterior is outlined with red and gold pinstripes stretching from the front to the back of the vehicle. The highlight of Impala is a hand-painted mural dedicated to the U.S. Marine Corps featuring women in dress uniforms while a more subdued interior features tan ostrich bucket seats outlined with black demands. To help carry over the exterior paint scheme, the center console remains the center of attraction and in all it’s a car that turned tragedy into triumph.