Newsletter
Sign Up today for our FREE Newsletter and get the latest articles and news delivered right to your inbox.
Home » 1968 Cadillac Deville Convertible – Night Train 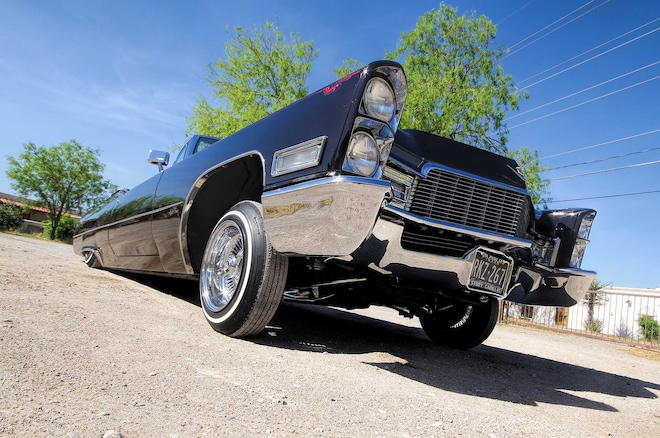 Cadillac has always been synonymous with a quality vehicle. It is also one of the oldest auto manufactures in U.S. history dating back to 1902. In the 50’s and 60’s the cars were only owned by the rich and famous. With a price tag more then double the average car we can see why. Back then the old adage was true you get what you pay for. The 1968 Cadillac was no exception with an overall length of 225″ it is the same size as a modern day Suburban. Tury Mota has always had a soft spot for Cadillacs and over the years he built a few. So when he got the itch to start a new project he sold his ’84 Caddy to free up some funds. Scouring the web he ran across what he was looking for something a little more OG on good old Craigslist. The car was located in Albuquerque New Mexico So he hooked up the car trailer and Grabbed his brother in law and son and headed north. It was love at first site after cash was exchanged the car was loaded up and headed back to El Paso. Tury wasted no time tearing into the new project and the motor and tranny had already been gone through by it’s previous owner so it was on to the cosmetics. After taking all the chrome over to Electroplating of El Paso he sent to the car over to Leo’s Body Shop. Where Ruben Sifuentes Sr. started working on the small ship getting it ready for some fresh color. Tury decided he wanted a black base with a red flake over the top so that the car would sparkle in the sun. Sammy “Saco” Acosta stepped in and added some silver leaf and pinstripes to accent the body lines of the big beast. With the car all shiny once more he moved on to revamping the interior. He didn’t have to look far because the same shop that painted the car also sewed up some new red vinyl to complete the job. Once back home Tury installed a complete air ride set up and a set of 14×7 Daytons. Which fill out the wheel wells nicely. As with a lot of projects it is never truly done and his list of future upgrades is long.